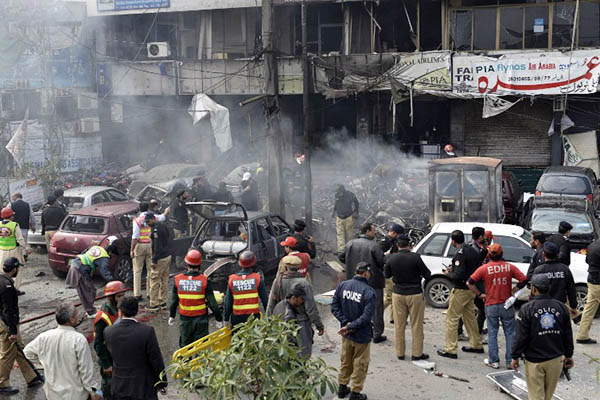 At least five people were killed and 25 others injured in a suicide attack targeting the Police Lines headquarters in Lahore on Tuesday.

“It was a suicide attack,” confirmed senior police official Haider Ashraf. “Police have recovered the body parts of the bomber,” he added. Mushtaq Sukhera, the chief of police in Punjab province, also confirmed the suicide bombing. “The attack took place at 12:36 p.m. The suicide bomber was waiting near an electrical transmission pole outside the Police Headquarters,” he added. According to Sukhera, 5-8 kg of explosives were used in the attack.

The police chief said security forces had been aware that a suicide bomber had reached Lahore and had been prepared to thwart him.

“There was a huge crater at the site of the blast,” said Sibghatullah, the in-charge of rescue operations in the region. “We could see flames coming from a building inside the Police Lines too,” he said.

He said four dead and five injured, including a female cop, had been shifted to Ganga Ram Hospital. One of the injured police officials died at hospital, he added. “Some of the wounded have also been shifted to the nearby Mayo Hospital.”

Nayab Hussasin, a spokesman for the Punjab Police, said officials had launched a search operation in the surrounding areas.

Prime Minister Nawaz Sharif, in a statement, strongly condemned the attack and directed the provincial government to provide the best treatment facilities to the injured.

The Jamaat-ul-Ahrar faction of the Tehreek-e-Taliban Pakistan claimed responsibility for the attack in a statement issued to media. Spokesman Ihsanullah Ihsan said: “This attack is dedicated to the men who have been killed in ‘encounters’ or been executed.” He added: “We warn the rulers [of Pakistan] that we will take vengeance for the blood spilled by them.” He also said that the attacks would continue until Islamic rule had been established in Pakistan.

these mother fuckers must come face to face to armed forces and ask them to kill them ?so then he can put his version of shriat in his qabar,kiya lanati hai,islam ka naam le rha hai,buzdal hai apne baap usama bin laden ki trah