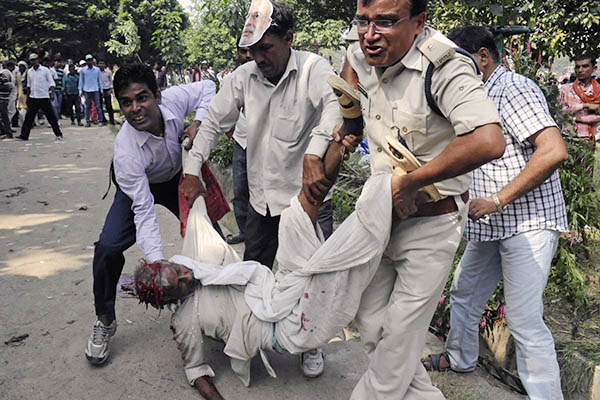 Seven small bombs detonated in Patna city before Narendra Modi was due to hold a campaign rally.

A series of crude bombs killed five people in an eastern Indian city on Sunday, shortly before opposition party leader Narendra Modi was due to hold a campaign rally, police said.

Seven small bombs exploded near the venue in Patna where tens of thousands were gathering to hear Hindu hardliner Modi, a popular but divisive leader, launch the opposition’s campaign for elections in Bihar state.

The first explosion occurred in a public toilet at a railway station in Patna, followed by more blasts near and just outside the Gandhi Maidan where the rally was held.

Two people were arrested, another police officer said, while the national government deployed anti-terrorism forces to Bihar to investigate.

Television footage showed people running from an explosion, with smoke rising above them.

“The condition of nearly half a dozen injured is critical,” said an official from the Patna Medical College and Hospital, adding that some people were injured in stampedes after the blasts.

Modi, a polarizing figure—particularly among religious minorities—later took to the stage and urged Hindus and Muslims to unite to overcome poverty in Bihar, a key battleground in the general election due next May.

“If we want to take Bihar forward we need to unite people of all religions, caste and creed together … We want to unite people, not divide them,” he told cheering supporters in a speech that did not mention the blasts. “Our opponents are fooling people. That’s why I want to ask my poor Muslim and Hindu brothers, do you want to fight against each other or against poverty?”

Modi has been campaigning to topple the ruling Congress party since he was named last month as the Bharatiya Janata Party’s prime ministerial candidate for the national elections.

Modi, the chief minister of the economically successful western state of Gujarat, is popular with the corporate world. Many hope he can revive Asia’s third-largest economy if elected next year. But he remains a divisive figure, tarred by religious riots in Gujarat in 2002. Approximately 2,000 people were killed, mainly Muslims, according to rights groups.

Modi was chief minister at the time and denied any wrongdoing, but one of his former ministers was jailed last year for orchestrating some of the violence.

In a statement, Prime Minister Manmohan Singh condemned Sunday’s blasts, appealed for calm and “called for urgent steps to identify and take action against those responsible.”

Two more unexploded crude bombs were discovered at the railway station after a bomb disposal squad swept it, a police official told the Press Trust of India.

After the rally Modi described the blasts as “deeply saddening and unfortunate.”

“Condolences with families of deceased & prayers with injured. I appeal for peace & calm,” he tweeted.

Modi and his political rival Rahul Gandhi from the Congress party are holding a series of mass rallies across the country in a battle to win five key state elections later this year. Those elections are seen as a crucial test of popularity, with both parties hoping to capitalize on any momentum from the results for next year’s general election.