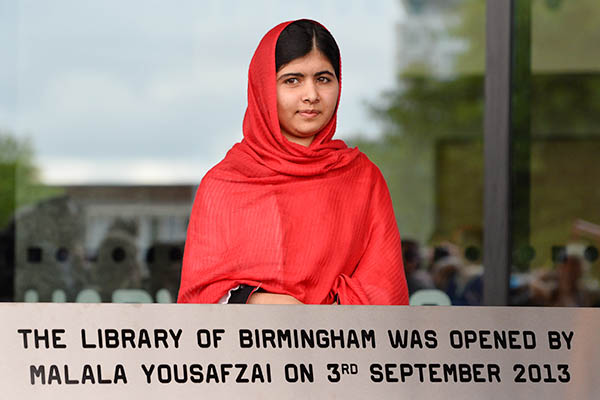 Malala Yousafzai, the Pakistani schoolgirl shot in the head by the Taliban after campaigning for girls’ right to an education, said books were “the weapons to defeat terrorism” as she opened a new library in her adopted English city on Tuesday.

The 16-year-old gave a speech before unveiling a stainless steel plaque to mark the opening of Europe’s biggest public library, the gleaming new Library of Birmingham.

Yousafzai, who was flown to the central English city for surgery last October after being targeted by a gunman as she travelled to school in Pakistan, said she had challenged herself “that I will read thousands of books and I will power myself with knowledge. Pens and books are the weapons that defeat terrorism.”

She added: “There is no greater weapon than knowledge and no greater source of knowledge than the written word.”

The teenager, who has been nominated for this year’s Nobel Peace Prize, spoke confidently with just a hint of stiffness on the left side of her face.

Malala, who came close to death when the Taliban gunman’s bullet grazed her brain, is attending a school in Birmingham, which has a large Pakistani population. Her family has moved to the city to be with her.

The high-tech Library of Birmingham, the latest in a string of projects aimed at regenerating the 1970s-era city center, has a skin of metal hoops and replaces the nearby concrete Central Library, which opened in 1974. The new library contains a million books and houses first editions of William Shakespeare’s works.

Books, which spread light, can definitely defeat not only terrorism but all other evils, which are like darkness. Darkness vanishes when light comes. Malala should also try to spread this light of knowledge here in Pakistan where it is needed most. Her courage is outstanding. We are proud of this young girl, will support her and wish her all the best!