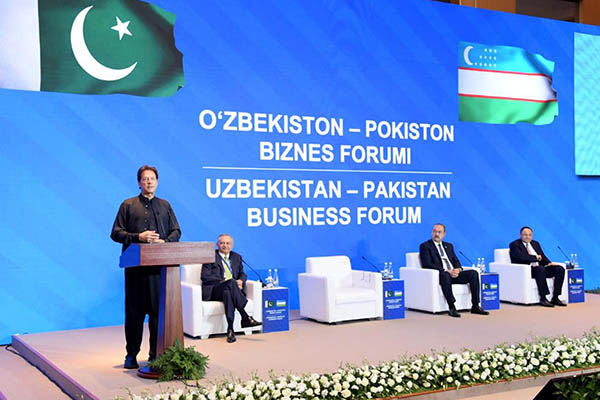 Prime Minister Imran Khan on Thursday predicted “new avenues of prosperity” in the Central Asian region if Pakistan and Uzbekistan are able to improve bilateral ties and expand trade between them.

“Pakistan has immense potential to connect Central Asia with the rest of the world and become a hub of trade,” he said in an address to the Uzbekistan-Pakistan Business Forum at Tashkent. Assuring Uzbek businessmen and traders that Pakistan would extend every possible facilitation to them to promote trade between the two countries, he said a proposed rail line connecting Uzbekistan, Pakistan and Afghanistan would revolutionize the region.

However, he stressed, exploiting the region’s potential requires peace and security. Referring to Afghanistan, he said peace and stability in the war-torn state would result in the materialization of several development projects across Central Asia. “Pakistan is keen for peace in Afghanistan and considers it vital for trade connectivity among regional countries,” he said, adding that this would also raise the living standards of all citizens, as it had in the European Union.

Khan noted that Pakistan and Uzbekistan’s relations were rooted in common faith, culture and history, adding that this offered them a unique dimension to explore each other in diverse areas. Uzbek P.M. Abdulla Aripov, likewise, referred to the strong ties between Pakistan and Uzbekistan in multiple areas of cooperation. Welcoming the premier to Uzbekistan, he said the visit would usher in a new area of cooperation and joint ventures between the two brotherly countries.

Addressing media after the event, Foreign Minister Shah Mehmood Qureshi said the business communities from both countries had expressed great interest in bilateral engagement. He said the Business Forum was attended by around 130 representatives of leading companies and business houses from Pakistan, adding that agreements worth $453 million had already been signed.

Later, in a joint press conference with Uzbek President Shavkat Mirziyoyev after delegation-level talks, Khan announced that the two countries had decided to collaborate on a film featuring the life of Mughal Emperor Zaheerud Din Babar so that the youth of both countries could learn of the historical connections between them. He said if the film succeeded, the two states should also consider productions featuring the lives of poet Mirza Ghalib, Allama Muhammad Iqbal, and Islamic scholar Imam Bukhari.

“We hope that this will be the beginning of a strong cultural exchange between the two countries. As our countries get closer … I will introduce cricket to the people of Uzbekistan,” he said, with Mirziyoyev agreeing that it was important for future generations to learn of the legacy of Babar’s dynasty. “We should say that this is just the beginning. I look forward to visiting Pakistan in order to see those very places that have the touch of our ancestors and to see the life in Pakistan and people of Pakistan,” he added.

During the media briefing, Khan reiterated his claims of Pakistan shifting from a geostrategic state to one focused on geo-economics. “The idea is to create wealth. If we create wealth then we can spend it on our lower strata of society and lift them up,” he said, claiming a strong trading relationship between Islamabad and Tashkent would be a “win-win” for both countries.

The prime minister claimed that he and the Uzbek president had also discussed the political situation in Afghanistan, adding that they had decided to push for a summit comprising Uzbekistan, Tajikistan, Iran, Pakistan, and Turkey to help facilitate the peace process in the war-torn state. “For that, we hope that our foreign ministers will first meet and then go on and try to have a summit so that we can stop what looks like a civil war,” he added.

During delegation-level talks, both sides signed a 40-point “Joint Declaration on the Establishment of Strategic Partnership between Uzbekistan and Pakistan.” In it, both nations have pledged to increase cooperation and continue supporting each other at international forums, including the Shanghai Cooperation Organization. The declaration also noted that the Afghanistan situation had been discussed in detail.

Among the memorandum of understandings (MoUs) and agreements signed during the trip are an accord to exchange pre-arrival information on goods; transit trade; cooperation in military education; and a focus on simplifying visa procedures for businessmen and tourist groups.

MoUs were also signed between the Foreign Service Academy of Pakistan and the University of World Economy and Diplomacy of the Uzbekistan’s Ministry of Foreign Affairs; Cultural Exchange Program 2021-2026; and several matters related to tourism.