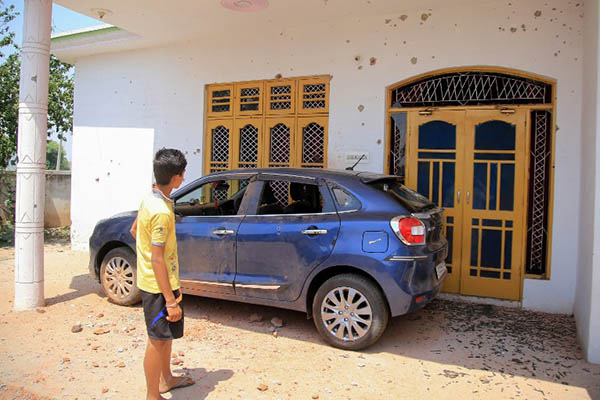 Death toll from confrontation hits 16, the majority of those killed civilians on both sides of the border

A mortar and gunfire battle between Indian and Pakistani forces along their Kashmir frontier killed five civilians on Wednesday, taking the death toll in the six-day confrontation to 16, officials said.

At least 80,000 people from dozens of villages along the 200-kilometer long border between the Jammu region in India-administered Kashmir and Pakistan’s Punjab province have fled their homes since Friday, an Indian government official said.

“Some have gone to their relatives and for others we are arranging shelter, food and water,” local divisional officer Hemant Kumar Sharma told AFP.

Indian authorities have closed all schools within five kilometers of the border and government forces used armored vehicles to evacuate panicked residents who left behind homes and cattle.

The Indian and Pakistan militaries held talks this week but failed to calm one of the deadliest flare-ups this year. “Five residents have died in the cross border shelling so far,” Sharma said. India-administered Kashmir’s director general of police, Shesh Paul Vaid, had earlier said that 30 were wounded overnight in Pakistani firing.

On Tuesday an Indian soldier and an eight-month-old baby were killed. Another nine people died on the first day of hostilities on both sides of the border, just before a visit to the region by India’s Prime Minister Narendra Modi.

“People are helping each other to flee. Police are also helping in evacuating vulnerable border residents,” Vaid said. Another police officer, speaking on condition of anonymity, described the flare-up as a “war-like situation” in the affected districts of Samba, R.S Pura, Akhnoor and Arnia.

The border where the clashes broke out is not disputed between the two nations, even though both lay claim to all of Kashmir. The Himalayan territory has been divided between India and Pakistan since the end of British colonial rule in 1947.

Pakistan Rangers and Indian Border Security Force officers spoke by telephone on Monday. The rival militaries often accuse each other of initiating battles in violation of a 2003 border ceasefire.