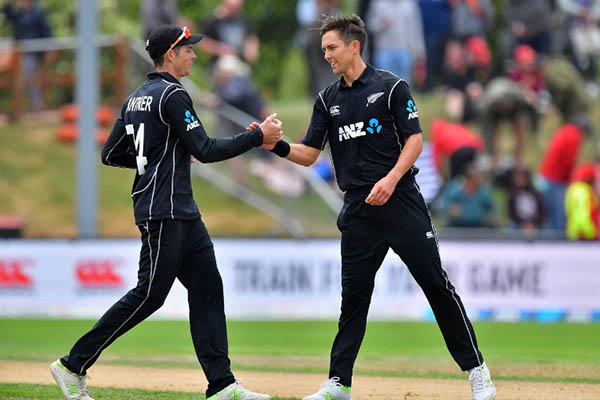 A withering spell by Trent Boult saw New Zealand destroy Pakistan by 183 runs in the third one-day international in Dunedin on Saturday to comfortably wrap up the series in Dunedin.

New Zealand have won all three matches so far and captain Kane Williamson said the target is a clean sweep of all five ODIs. Boult rocked Pakistan with three wickets in five balls to take out the cream of their top order on his way to figures of five for 17.

After New Zealand made 257 batting first, boosted by 11 in the final over before Boult was dismissed on the last ball, Pakistan were all out for 74 in the 28th. “It was a big game for us. We wanted to get the series done,” said man of the match Boult. “To score only 250 on the board we knew we had to fight hard and to come out like that was very satisfying.”

Williamson said the target now was to remain unbeaten. “That’s the focus. The focus is trying to win each game. The guys were smart today and that’s something we pride ourselves on,” he said. “It was a fantastic performance all round. Trent was outstanding getting five.”

Pakistan had slumped to eight for 32 in the 19th over and threatened two unwanted records—the lowest ODI score of 35, held by Zimbabwe, and Pakistan’s own lowest score of 43.

Sarfraz Ahmed (14 not out), Mohammad Amir (14) and Rumman Raees (16) added 42 for the last two wickets but Sarfraz saw serious problems with the top order batting. “It was very disappointing, a tough loss,” he said. “Our bowlers bowled very well but the problems continue with the batting which again flopped. The problem is [facing] the new ball.”

Boult removed Azhar Ali, Fakhar Zaman and Mohammad Hafeez in the space of five balls to put Pakistan in a hole they were never going to get out of.

After 10 overs, the tourists were three down for just nine runs and while they struggled to stay afloat, Babar Azam was unnecessarily run out.

Part-time bowler Colin Munro, with career figures of one for 203 before this match bowled Shadab Khan without scoring and had Hasan Ali spectacularly caught by Williamson for one to return figures of two for 10 off seven overs.

Pakistan came to New Zealand on a nine-match winning streak and the promise of providing a more formidable opposition for New Zealand who had just swept a series against the West Indies.

After losing the first two matches they needed to win in Dunedin and had their tails up when Munro went for eight in the second over. But half-centuries to Kane Williamson (73) and Ross Taylor (52) plus 45 for Martin Guptill set New Zealand up.

It was Taylor’s 57th ODI half-century to equal the New Zealand record held by Stephen Fleming and Nathan Astle. But his dismissal sparked a Pakistan revival in the field in which they took seven for 48 in the last eight overs.