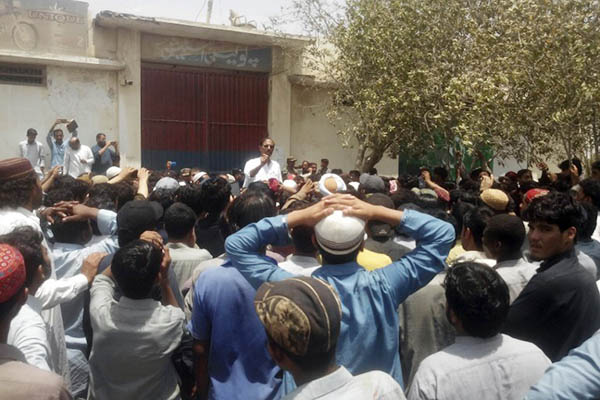 A 10-year boy was killed and five others were wounded on Thursday when a mob attacked a police station in an attempt to lynch a Hindu man charged with blasphemy in Balochistan province, officials said.

It was the third major vigilante attack linked to accusations of insulting Islam in less than a month, as law enforcement agencies struggle to deal with a surge in violence. The latest incident occurred in the town of Hub following the arrest of Prakash Kumar, a 34-year-old member of the country’s Hindu religious minority.

Kumar, a crockery shop owner, was detained on Tuesday for allegedly posting an incendiary image on social media. “When news of his arrest was published in local newspapers on Thursday, a crowd of some 500 people including traders, clerics and politicians surrounded the town’s police station to demand he be handed over,” police official Abdul Sattar told AFP.

When police refused, the mob turned on them, beating up officers and local government officials before opening fire with guns. A 10-year-old boy was killed and five others were wounded in the melee, he added.

Jam Mohammad, a second police official, confirmed the account, adding: “The siege went on for about three hours and the mob went on a rampage demanding Kumar be handed over.”

Order was restored once the government sent in paramilitary troops to disperse the mob, which police said was led by an influential cleric as well as Zia Shehzad, a politician from the ruling PMLN political party. But Mujeeb Qambrani, a senior local administration official said his government had not succumbed to the mob because “we are legally bound to protect the accused.”

On April 13, hundreds of men attacked and killed a 23-year-old journalism student in the northwestern town of Mardan in an incident that sparked a national backlash after a video of it went viral online. Just over a week later a mob attacked a mentally ill man claiming to be prophet at his local mosque in northwestern Chitral. He was later saved by police.

The spate of incidents come in the wake of a government drive against blasphemy, a hugely sensitive charge in Muslim-majority Pakistan. Unproven allegations have led to dozens of mob attacks or murders since 1990.