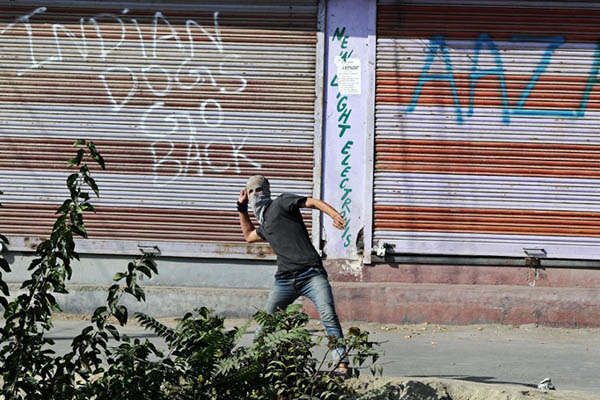 India-administered Kashmir’s Srinagar came under curfew again after thousands clashed with government forces during the funeral of boy killed in protests, police said on Saturday.

Police and paramilitary troops fired tear gas, pellets and live rounds into the air to disperse the funeral procession of the 12-year-old as his body was carried to Srinagar’s “Martyr’s Graveyard,” a police officer told AFP on condition of anonymity as he was not authorized to speak to the media.

Residents said the boy was sprayed with pellets in the lawn outside his home, but police say he was part of anti-India protests that took place on Friday. “We are taking all possible measures so that the protests don’t spread to other areas,” the officer said, referring to the curfew.

The angry mourners were shouting “We want freedom” and “Go India, go back” during the procession.

More than 50 people were injured during Friday’s protests in the restive Himalayan region, which has been roiled by deadly violence for nearly four months.

At least 90 people, most of them young protesters, have been killed and more than 12,000 injured in clashes with Indian security forces. Thousands more have been arrested since the unrest began on July 8, when a popular militant leader was killed in a gunfight with soldiers.

Since then shops, schools and most banks have remained shut and authorities have suspended mobile phone Internet services.

In a separate incident overnight, suspected rebels fired at a police post in the southern Shopian district killing an officer and injuring three others, a police statement said.

Kashmir has been divided between rivals India and Pakistan since the end of British rule in 1947. Both claim the territory in full. Anti-India sentiment runs deep in Kashmir, where rebel groups have fought Indian troops since 1989 for either independence or a merger with Pakistan.

Tension between the nuclear-armed neighbors has soared after a militant attack last month on an Indian army base killed 19 soldiers, with the two armies exchanging heavy fire and mortars across their de facto border in Kashmir almost every day.