Bracing for the ‘Beard Patrol’ 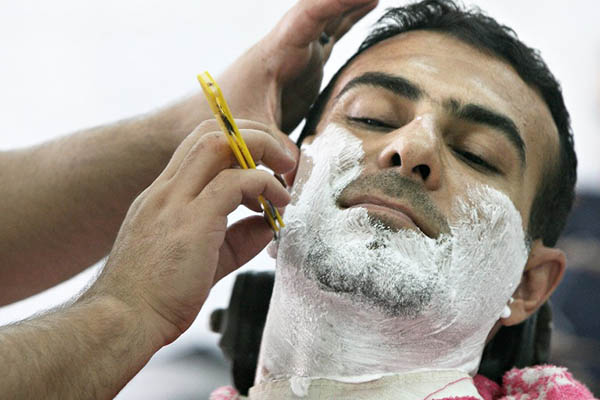 In Iraq’s Islamic State-held Mosul, shaving could land you in jail.

Every time he looks in a mirror, Laith Ahmed is worried. As of Monday, the young Iraqi’s hopelessly hairless chin could land him in an Islamic State group jail. The jihadist group has handed out leaflets in their stronghold of Mosul in recent weeks announcing that full beards become compulsory on June 1 and explaining why shaving is punishable.

“My facial hair is just slow to come out for my age,” said the 18-year-old, who like others in this story did not give his real name for fear of retribution. “I’m scared because they deal ruthlessly with anyone who opposes or ignores their instructions,” he said from Mosul, the de facto Iraqi capital of I.S.’s self-proclaimed caliphate. “My work in a bakery means I have to leave home every day and interact with Daesh militants,” he said.

Mosul is Iraq’s second city and used to have a population of around two million before I.S. swept in a year ago and made it their main hub. Unlike some of the other cities I.S. conquered in Iraq, Mosul still holds a large civilian population, making any air campaign difficult.

The group made Mosul a laboratory for its state-building experiment, not just a military bastion but a city where it regulates everything from education to the opening hours of shops.

“What hairdressers do today, shaving and trimming men’s beards, is an accessory to sin,” reads a leaflet, which quotes a selection of hadiths, or sayings of Islam’s Prophet, supporting the claim that he banned shaving. “Thanks to our brothers from the Islamic police, an order has been issued for the shaving of beards to be banned and violators to be detained,” it says.

Nadhim Ali, a 30-year-old taxi driver from the eastern side of the city, said he has never been able to grow a beard or even a moustache because of the bad skin rashes he gets. He said he submitted medical reports on the matter to the religious police. “They didn’t care… One of them told me I’d better stay at home if I shaved.”

Moslawis are essentially trapped in their city. Anyone wishing to leave needs approval from I.S. and has to deposit documents proving ownership, usually of property or a new car, which will be seized if the applicant does not return by an assigned deadline. “So just for ensuring my family’s livelihood, I can choose between getting sick and risking lashes or arrest,” said Ali.

The Taliban in Afghanistan had so-called “beard patrols” that could send men to jail for three days to a week simply for having trimmed their beard. Mosul residents said a tougher beard policy imposed by I.S. one year into the group’s occupation of the city was a ploy, not a sign of renewed religious zeal.

“We all know what Daesh is trying to achieve with these unacceptable laws on women wearing the veil and men growing beards,” said a teacher, who gave her name as Umm Mohammed. “They want to make everyone a human shield… With military operations [to retake Mosul] looming, they want to blend in with the population,” she said.

Airstrikes by Iraqi and U.S.-led coalition warplanes have targeted I.S. positions and hideouts in the Mosul area since August 2014 but any effort to reclaim control of the city has yet to begin in earnest. A former member of the security services who still lives in Mosul said I.S. militants had been adopting a lower profile in recent months.

“For example, I.S. members lately have been using more and more regular, unmarked civilian cars. They’ve ditched the military vehicles and flags,” he said. “This new rule on growing beards is in the same vein. They want to hide among civilians,” he said.