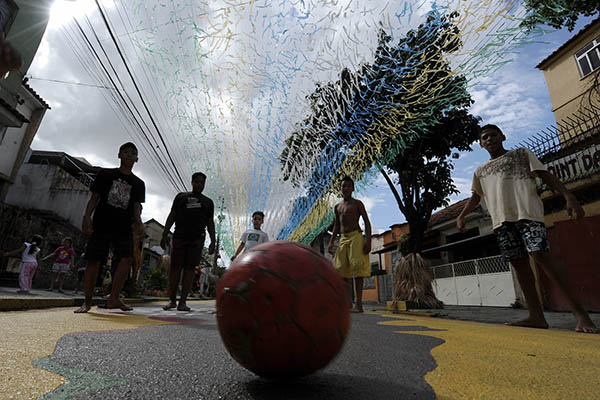 The second Street Child World Cup will be hosted by Rio de Janeiro from March 28 to April 6.

Sixteen-year-old Mohammad Salman thought he was destined to live his life on the mean streets of Karachi, addicted to drugs, begging for survival and with no prospects for a better future. Now he is set to represent Pakistan in the second edition of the Street Child World Cup, which starts in Brazil this week.

“In my past life I was like a street urchin, using drugs, running away from school and studies. I was an addict,” said Salman, who left home at age 13 after fighting with his parents. “We didn’t know what we were doing and what we should do. I was staying away from home.”

Salman’s salvation came after the non-profit Azad Foundation, which rehabilitates street children in the sprawling metropolis of 18 million, spotted him. “They helped develop my interest in football,” he said. “I’m excited to be part of the Street Child World Cup.”

The Amos Trust, a British non-profit organization, convinced football’s governing body FIFA to initiate the Street Child World Cup in 2010. The first edition was held in South Africa ahead of the 2010 World Cup and featured Brazil, South Africa, Nicaragua, Ukraine, India, the Philippines, Tanzania and a team from England. India won the inaugural event, which proved so successful that it was decided to hold it ahead of every football World Cup. The second edition will be hosted by Rio de Janeiro from Friday until April 6.

Owais Ali, another former street child, said football has earned him respect. “When I was living in the street, no one treated me with respect; I did not know anything as I was illiterate,” said Owais, who like Salman comes from Karachi’s troubled Orangi town, a shanty settlement. “I was confused once I left home and the city was full of problems for me. Then I found a way through Azad Foundation who supported me and helped me in studies. Now I am in the ninth grade. After I started football I found new friends and now people respect me.”

The seven-a-side Street Child World Cup, to be held in football’s spiritual heartland, represents a far cry from roadside matches in Karachi with rocks used for goal posts. Away from the pitch, organizers plan to host celebrity guests, a youth participation conference and exhibits featuring Brazilian artists.

Getting Pakistan a place in the tournament gave the children a tangible goal to work toward, said Iftan Maqbool of the Azad Foundation. “It has turned out to a worthwhile exercise and now our goal is to earn recognition for Pakistan,” he said.

According to the Foundation, Karachi is home to roughly 200,000 street children, many of whom fall into gangs linked to political parties engaged in a bloody battle for control over the city. Coach Abdul Rasheed admitted the task of motivating children from such troubled backgrounds was sometimes challenging.

“It was tough when we first threw a football at them,” said Rasheed. “They were not consistent in their efforts but we kept our mission and regrouped these kids into a team,” he said. “We have worked hard on these kids as others before going to Brazil and the aim is to fight for the trophy as well as for recognition.”