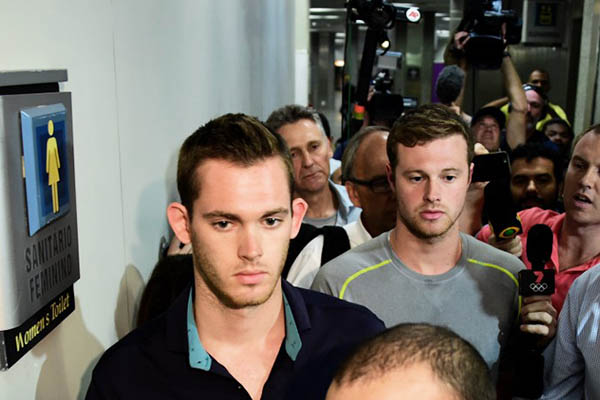 Brazilian police pulled two U.S. Olympic swimmers off a U.S.-bound plane in a row over their claim of having been victims of an armed mugging, officials said on Wednesday.

“We can confirm that Jack Conger and Gunnar Bentz were removed from their flight to the United States by Brazilian authorities,” said Patrick Sandusky, spokesman for the U.S. Olympic Committee. The two were with star U.S. swimmer Ryan Lochte and another squad member, James Feigen, when they said they were robbed at gunpoint early Sunday.

A Brazilian judge ordered a probe, saying their story is full of inconsistencies.

Globo, a leading Brazilian news organization, posted a video online showing the two swimmers walking into a police station. They were later released “with the understanding that they would continue their discussions about the incident on Thursday,” Sandusky said.

Lochte, who went home before Brazilian authorities ordered the swimmers’ questioning, and Feigen, who remains in Brazil, will cooperate with the investigation, broadcaster NBC reported.

Earlier Wednesday, Judge Keyla Blank “issued warrants for searches and the seizure of the passports for the U.S. swimmers,” a statement from her office said. “With this, they are banned from leaving the country,” the statement said.

The court order was the latest twist in a story of a supposedly terrifying incident that embarrassed Olympic authorities and ramped up the fear factor for hundreds of thousands of tourists in Rio at South America’s first Olympics. Now, Brazilian officials are suggesting that the U.S. swimmers may have made up their account—and could face charges for filing a false report.

Lochte says he and three teammates were held up by muggers posing as police as they left a late night party in central Rio. The incident was immediately plunged into confusion when the International Olympic Committee denied that anything had happened.

Lochte, however, gave interviews describing the supposed robbery in detail and Brazilian Olympic authorities later issued a public apology for the security slip up.

With some 85,000 police and soldiers guarding the Olympics—twice the number from London in 2012—the apparently high-profile crime touched a nerve in Rio. In addition to multiple incidents of thefts from Olympic athletes and media, a Portuguese government minister was mugged in the swish Leblon district.

Lochte said he had a gun put to his forehead in the robbery, when the swimmers’ taxi was pulled over by criminals who forced them to lie on the ground and stole money and other items. “The guy pulled out his gun, he cocked it, put it to my forehead and he said, ‘Get down,’” Lochte said afterwards. “He took our money, he took my wallet—he left my cell phone, he left my credentials.”

However, Olympic officials have said police are still looking for key witnesses, including the cab driver. And Blank’s office said the judge was probing “possible inconsistencies in the swimmers’ stories,” including varying accounts of how many assailants were involved.

According to the NBC report, Lochte strongly denied that the swimmers fabricated the story of the robbery. “I wouldn’t make up a story like this nor would the others—as a matter of fact we all feel it makes us look bad,” it quoted Lochte as saying.