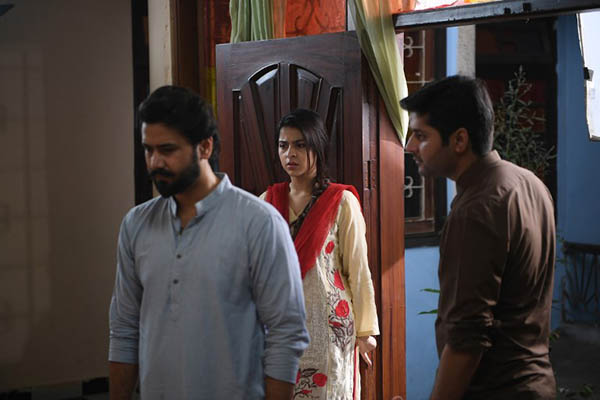 In life, she chased fame, hoping to make her mark in Pakistani society. In death, murdered social media starlet Qandeel Baloch may have achieved her goal. Today she is a household name, and her tragic story has been turned into a soap opera—one of several immensely popular TV shows seeking to challenge the country’s conservative taboos.

Baaghi, which means ‘Rebel,’ charts the rise of Baloch from young, exploited girl to internet sensation infamous for her provocative selfies until her shocking murder, with her brother confessing to the high-profile killing. The show airs on private TV channel Urdu 1 every Thursday. Viewing figures are unavailable, but its pilot episode has been viewed more than 1.6 million times on YouTube.

“That girl was a lioness. She should not have died yet,” says Shazia Khan, a writer on the series.

Baloch’s fate polarized Pakistan. For some, it inflamed outrage over so-called “honor” killings in which hundreds of predominantly women are killed each year, usually by male relatives, for bringing what they perceive as shame on their families. But the concept of “honor” is deeply embedded in parts of Pakistan’s patriarchal culture, and other voices argued that Baloch had made herself a target by her actions—tame by Western standards but deemed provocative in the conservative country.

The decision to turn her death into one of Pakistan’s popular television soap operas has ensured the debate surrounding such murders of women endures.

Notorious for its high-profile story, Baaghi is just one of a wave of soap operas and dramas airing plotlines that revolve around such social issues: from domestic violence to child abuse, forced and child marriages, misogyny and women’s rights. They are devoured by Pakistan’s 207 million strong population.

Their popularity makes them a potentially powerful vehicle for progress, says lawyer Benazir Jatoi, who works for women’s rights watchdog the Aurat Foundation and has long argued that laws protecting women are not enough to effect grassroots change.

Mujhe Jeene Do (Let Me Live), another soap on Urdu 1, highlights the issue of child marriages. “If there [is] not widespread awareness, who would know that it is a crime?” Angeline Malik, the show’s director, tells AFP.

Pakistan’s biggest entertainment channel, Hum TV, is a pioneer in using social issues as soap opera fodder. In 2016 the channel aired Uddari, or “Flight,” which told the story of a young girl sexually abused by her stepfather and ignited a debate about the sexual abuse of children inside the home. “Uddari took the sensitive subject … to every household where discussion on sex is still a taboo,” says one avid fan, Aabida Rani.

In Sammi, which revolves around its eponymous star character, the station highlighted honor killings, forced marriages, and denial of property inheritance to women all in one show.

Sultana Siddiqui, a producer who later set up her own TV station, said they wanted Sammi to be a mirror of society, and an example of “how a taboo issue could be displayed in proper manner.”

Their efforts are not without backlash, and Siddiqui describes pressure from media regulators as well as a wave of vitriol on social media with people accusing her and her channel of spreading vulgarity and destroying social values. But the shows’ popularity kept them on the air despite the blowback, she says.

Even as the shows push for awareness and change, the way soap opera heroines are portrayed can cause consternation. Sadaf Haider, a blogger, wrote in October that the storyline for Baaghi followed a predictable Pakistani track relieving the heroine of autonomy—essentially portraying Baloch as a victim.

“The actual Qandeel didn’t consider herself a beychari (helpless) at all, even a cursory reading of her interviews shows she worked hard and was proud of what she had achieved,” Haider wrote. “Qandeel took full responsibility for her choices… So why has Baaghi portrayed something else entirely?”

Pakistani journalist Fifi Haroon has complained the portrayal of women in such shows still fits in to a patriarchal narrative. “Simpering, dewy-faced heroines … suffer in obstinate silence or misguided stoicism,” she wrote in a BBC piece. “Tears are plentiful. Producers now claim that if you don’t show women crying, the drama won’t garner ratings.”

Lawyer Jatoi, while praising soap operas as vehicles for change, took a cautious view. “They must ensure they are responsible enough to handle such sensitive topics and address underlying issues so as not to add to the already existing stigmas,” she told AFP.

Haroon agreed, writing that their makers must be aware of their audience. “It is not just women,” she wrote. “Men too are observing what it takes to be a man in Pakistani society and of course, what they can expect from the women in their lives and homes.”