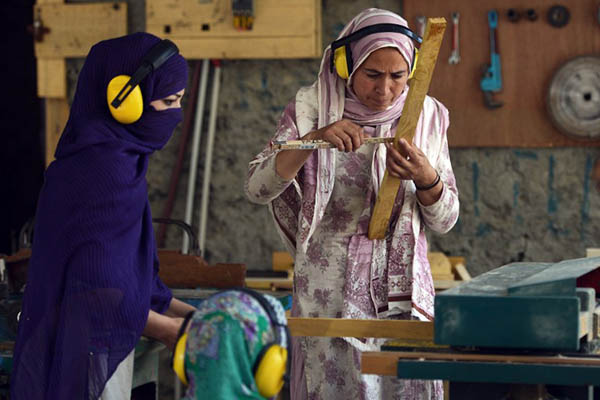 A group of young Pakistani girls sit on a carpeted floor listening as their teacher writes on a whiteboard, preparing his students for the rigors of climbing some of the world’s highest peaks.

This is Shimshal Mountaineering School, tucked away in a remote village in the breathtaking mountains of Pakistan’s far north, close to the border with China.

While most of Pakistan’s patriarchal society largely relegates women to domestic roles, in the northern Hunza valley, where most people follow the moderate Ismaili sect of Islam, a more liberal attitude has long prevailed.

Now the women of the region are breaking more taboos and training for jobs traditionally done by men, including as carpenters and climbing guides on the Himalayan peaks. “You have to be careful, check your equipment and the rope, any slight damage can result in death,” Niamat Karim, the climbing instructor warns the students.

Karim is giving last-minute advice to the eight young women who are about to embark on a practical demonstration of climbing class. They are the first batch of women to train as high altitude guides at the Shimshal Mountaineering School, set up in 2009 with support of Italian climber Simone Moro.

The women have spent the last four years learning ice and rock climbing techniques, rescue skills and tourism management. At 3,100 meters above sea level, Shimshal is the highest settlement in the Hunza valley, connected to the rest of the world by a rough jeep-only road just 11 years ago. The narrow, unpaved road twists through high mountains, over wooden bridges and dangerous turns with the constant risk of landslides to reach the small village of 250 households.

There is no running water and electricity is available only through solar panels the locals buy from China, but despite the isolation, the literacy rate in the village is 98 percent—around twice the Pakistani national average. The region has produced some world famous climbers including Samina Baig, the first Pakistani woman to scale Mount Everest.

The people of Shimshal depend on tourism for their income and the village has produced an average of one mountaineer in every household. The eight women training as guides have scaled four local peaks, including Minglik Sar and Julio Sar, both over 6,000 meters.

For aspiring mountaineer Takht Bika, 23, the school is a “dream come true.”

“My uncle and brother are mountaineers and I always used to wait for their return whenever they went for a summit,” Bika told AFP. “I used to play with their climbing gear, they were my childhood toys—I never had a doll.”

For Duor Begum, mountaineering is a family tradition and a way of honoring her husband, killed while climbing in the Hunza Valley. “I have two kids to look after and I don’t have a proper means of income,” she said.

Begum joined the mountaineering school with the aim of continuing the legacy of her late husband and to make a living. “I am taking all the risks for the future of my children, to give them good education so that they can have a better future,” she said.

But while the women are challenging tradition by training as guides, there is still a long way to go to change attitudes, and so far Begum has not been able to turn professional. “I know its difficult and it will take a long time to make it a profession for females but my kids are my hope,” she said.

Lower down in the valley, away from the snowy peaks, Bibi Gulshan, another mother-of-two whose late husband died while fighting in the Army has a similar tale of battling to change minds.

She trained as a carpenter under the Women Social Enterprise (WSE), a project set up in the area by the Aga Khan Development Network to provide income opportunities for poor families and advocate women’s empowerment at the same time. Set up in 2003, the WSE now employs over 110 women, between 19 and 35 years of age.

“I want to give the best education to my kids so that they don’t feel the absence of their father,” said Gulshan. “I started my job just 10 days after my husband was martyred, my friends mocked me saying instead of mourning my husband I had started the job of a men but I had no choice—I had to support my kids.”

With the Rs. 8,000 a month she earns in the carpentry workshop, Gulshan pays for her children to go to school, and she has also used her skills to build and furnish a new house for her family.

As well as giving poor and marginalized women a chance to earn a living, the WSE project, funded by the Norwegian embassy, also aims to modernize local skills.

Project head Safiullah Baig said traditionally, male carpenters worked to a mental plan of houses they were building—a somewhat unscientific approach. “These girls are using scientific knowledge at every step right from mapping and design and their work is more feasible and sustainable,” Baig said.