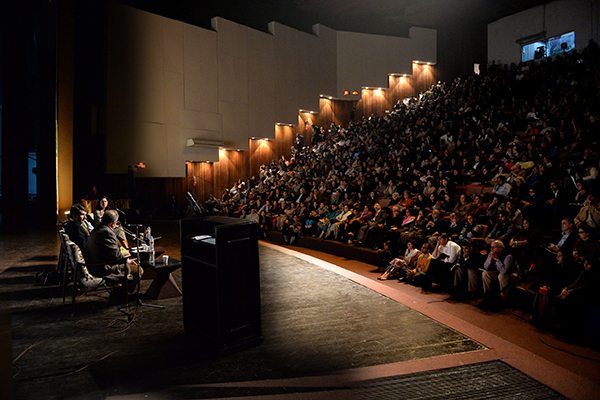 Despite Pakistan’s many political and social problems, Lahore hosts one of South Asia’s leading literary events, the Lahore Literary Festival. How do you put on such an event in a country dogged by power cuts and militant violence?

When it comes to celebrating life and literature in Pakistan nobody does it better than the citizens of Lahore. This weekend, an array of fiction and nonfiction writers, musicians and artists will arrive for the third annual LLF, which runs for three days from Feb. 20.

South Asia is awash with literary festivals. This year’s events in Kolkata and Karachi have ended, but Lahore’s is described by its competitors and rivals as the new star on the block, second only to Jaipur. The Indian city has just hosted the largest free literary festival in South Asia, with 250,000 people visiting.

Lahore was the cultural, intellectual and political heart of Mughal and Sikh India, then the British Raj and it still plays a major role in setting agendas in modern Pakistan. The city reflects the architecture, culture and food of all these empires.

The rites of spring were traditionally celebrated by the Basant kite-flying festival, but that was banned because of the deaths of several kite flyers. Now it is the literary festival that allows Lahoris and countless visitors to celebrate spring.

Hosting such a festival is not easy in a country better known for its wide-ranging political problems, terrorism, the chronic shortages of electricity and gas and most recently even petrol but these are challenges to be overcome. Some writers are under threat at home; others choose to live abroad although their subject matter remains Pakistan. Last year, Lahore’s festival hosted more than 50,000 visitors—a clear sign that Lahoris are not deterred by such problems.

Foreign writers have had to be reassured that despite Pakistan’s violence, Lahore is not the epicenter of terrorism nor is it a city facing collapse. Rather, it is still thriving and safer than other cities in the country even though threats of attack are constantly being made. For that there is close cooperation with the city authorities and the police at all venues. Nevertheless, some writers from abroad have heeded country alerts issued by their governments and stayed away—but others have filled the gap. This year only a couple of writers have pulled out so far. The show, say the organizers, will go on!

The festival—held at the Alhamra Arts Center—will pack in 75 sessions, with four to five events running at any one time. Evenings are set aside for Pakistani music—classical, folk, rock and pop. Leading Indian historian Romila Thapar will give the opening talk, introduced by Pakistan’s celebrated historian Ayesha Jalal. In its early decades Pakistan depended on foreigners to tell its political history. Now every year produces new and deeply researched histories by Pakistani scholars, who are showcased at Lahore.

Likewise, in the past two decades Pakistan has produced world-class novelists writing in English such as Mohammed Hanif, Kamila Shamsie, Daniyal Mueenuddin, Nadeem Aslam and others. When one of them has a new book out—this year it is Mohsin Hamid—it is a cause for multiple appearances and interviews at the festival. Already there is a second generation of even younger Pakistani novelists emerging, whose novels and short stories are very different from the first generation. Nearly 30 writers and artists from a dozen different countries will also be present, along with a large Indian contingent.

The festival will run simultaneous fiction and poetry sessions in Urdu, while Urdu newspaper columnists—who have millions of readers—will dominate several debates. There will also be sessions in Punjabi and Seraiki, ensuring that regional languages are not left out.

Pakistanis tend to have abysmal reading habits and one result of the festival is improving those statistics by bringing writers on stage before their readers and encouraging the young to buy books. The enthusiastic support from Lahore’s elders down to its students, who volunteer in huge numbers to help out at the festival, showcases how the festival brings people in the city of 12 million together. Lahore is now not just about architectural marvels, but also about sharing the wisdom of books.

Rashid, journalist and author, is on the advisory and organizing committees of the LLF. He is the author most recently of Pakistan on the Brink: The Future of America, Pakistan and Afghanistan.