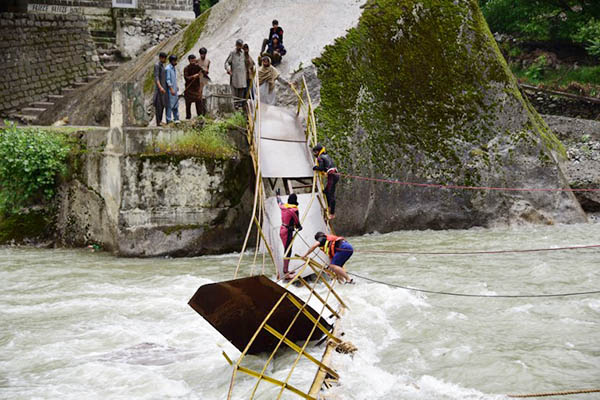 At least five students were killed and 12 others were reported missing on Sunday after a bridge collapsed at a tourist site in Pakistan-administered Kashmir, officials said, adding there was little hope of finding survivors.

The bridge, which overlooked a ravine in mountainous Neelum district, collapsed after some three-dozen university students walked across it to view a waterfall.

“We have recovered four bodies of boys and one of a girl. Twelve others are still missing and we don’t have any hope about them [surviving] because the water is very cold,” said Chaudhary Imtiaz, a senior government official in capital Muzaffarabad.

Imtiaz told AFP eight other students were injured in the accident.

Local police official Saleem Durrani confirmed the toll and said that the authorities had posted a warning near the bridge, telling visitors to walk across it in small numbers because it was only designed to accommodate five people at a time. “The bridge collapsed because around 40 people climbed it… at the same time,” Durrani said. “Its cemented foundation could not sustain the weight,” he added.

The scenic Himalayan region is a popular tourist destination but lacks infrastructure. Kashmir has been divided between India and Pakistan since the end of British colonial rule in 1947, but both claim the territory in full.