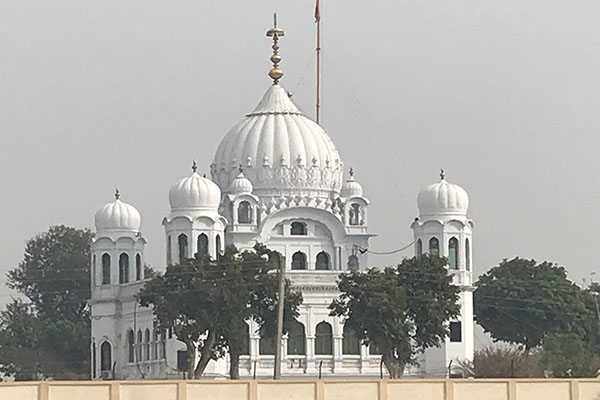 Approved by Pakistan Army chief Gen. Qamar Javed Bajwa, who also attended the groundbreaking alongside the prime minister, the ceremony marked a potential turning point for ties between New Delhi and Islamabad, stuck in a virtual ‘cold war’ since the 2008 Mumbai attacks that left 166 people dead and were attributed to a militant group based in Pakistan.

“We must bury the past,” Khan told a gathering of thousands in Kartarpur, which included both Indian and Pakistani officials and Sikh pilgrims from both sides of the border marking the 549th birth anniversary of Baba Guru Nanak, the founder of Sikhism. According to the Pakistan High Commission in India, over 3,500 visas were approved for Sikh pilgrims wishing to attend this year’s celebrations.

Dismissing talks of war, Khan said the only real alternative for the two nations was “friendship,” adding: “If India takes one step [for peace], we will take two.” The views emanating from India, however, were far less welcoming. New Delhi’s foreign minister made it clear the corridor would not result in any meaningful engagement between the rival nations, adding Indian ministers had only attended the ceremony to “offer prayers.”

This mattered little to Gurdial Kaur, a Sikh who traveled to Pakistan from London to participate in the 549th anniversary celebrations. “I can’t explain how happy my heart is today,” she told Newsweek. Congratulating the people of both countries for the initiative, she said it would boost people-to-people contacts between both countries and inevitably boost cross-border trade.

The site at the center of all the demands for greater access is the shrine of Baba Guru Nanak in Pakistan’s Narowal district. A narrow path winding its way between rice paddies leads to the Sikh Gurdwara, which is the sole structure of its kind visible on the bank of the Ravi River. Usually deserted, the thinly populated area comes alive with visiting Sikh pilgrims during ceremonies commemorating Baba Guru Nanak, a beloved figure among the region’s populace, Sikhs and Muslims alike.

Local history contends that Baba Guru Nanak’s death in 1539 resulted in a disagreement between his Muslim and Hindu followers, with the Muslims wanting to bury his body while the Hindus wanted to cremate it. With night approaching, both groups decided to leave the body in an open area until morning, when they hoped to resolve the issue to both sides’ satisfaction. Come morning, however, they found that the body had vanished and in its place laid a shawl filled with flowers. Seeing this as a sign, both groups divided the flowers, with the Muslims burying their share and the Hindus cremating the rest. Later, Guru Nanak’s Sikh followers built a shrine over his cremation site, with the gravesite located in its courtside. The reverence for Guru Nanak among Sikhs and Muslims has continued, with both communities visiting the shrine to offer their prayers. 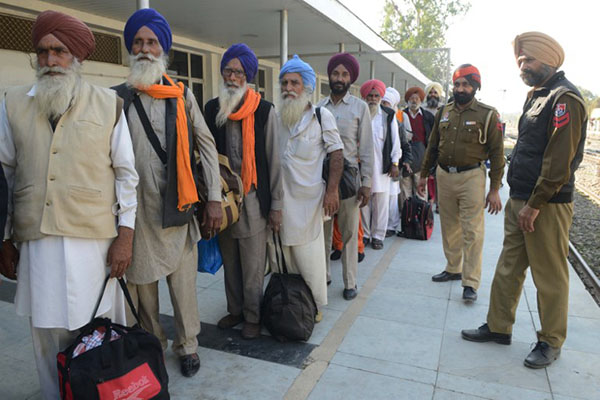 The Kartarpur Corridor, intended to allow religious devotees from India visa-free access to their holy sites in Pakistan for the first time since Partition, is due to be completed in November 2019—the 550th birth anniversary of Baba Guru Nanak. Pakistan and India are each responsible for the construction of the corridor within their respective territories, with an 800m-long bridge required over the Ravi River to connect the two states. According to the proposed logistics, which have yet to be verified, pilgrims will not be required to obtain any visas but will need special permits.

The corridor would significantly reduce the travel currently required by Sikh pilgrims visiting Pakistan from India. Instead of going via the Attari-Wagah border, which requires a detour of hundreds of kilometers, they will now have a direct route to Baba Guru Nanak’s shrine. Despite both countries’ respective groundbreaking ceremonies—India laid the foundation stone of its segment of the corridor two days prior to Pakistan—New Delhi’s subsequent reaction have left many leery of the future of the project.

Niranjan Singh Kapoor, 75, told Newsweek he was delighted to hear about the project, but expressed skepticism that it would last. “Relations between India and Pakistan are always very fragile. One small incident is enough to set everything aside,” he said. “I especially don’t trust the Indian politicians,” he said, referring to their belligerent reactions to the Kartarpur crossing. Experts agree.

“The Indians are very reluctant to back the Pakistani initiative because it is aimed at easing Pakistani contacts with the Sikh community,” says independent analyst Riffat Hussain, noting that New Delhi has long believed Islamabad is covertly supporting calls for Sikh separatism. Pointing to the backlash that had been experienced by Congress M.P. Navjot Singh Sidhu when he attended P.M. Khan’s inauguration ceremony and was pictured hugging Gen. Bajwa over the Army chief’s pledge to support the Kartarpur corridor, Hussain said the loudest critics were members of the Bharatiya Janata Party-led government.

“Many in India think that by earning the goodwill of the Sikh community from East Punjab, Pakistan is trying to attract the Sikh community to its side [at the expense of India],” added Hussain. He said the statements of India’s Swaraj over Kartarpur reflected this belief, adding he believed that India would soon find a reason to protest the corridor, delay it and eventually just scrap it altogether.

Aziz Ahmad Khan, who served as Pakistan’s High Commissioner to India from June 2003 to September 2006, agrees. No one should expect this corridor to yield any ‘spectacular’ results for bilateral ties, he told Newsweek. “I do not think that will materialize,” he added.

Shoring up their beliefs was a slew of coverage by the Indian press that tried to play spoiler. The negativity reached such a crescendo that Pakistan’s Foreign Office was forced to issue a statement reaffirming that the Kartarpur corridor was being pursued “solely in deference to the longstanding wishes of our Sikh brethren.”

Despite the acrimony between the governments of Pakistan and India, the Sikh pilgrims who would directly benefit from the Kartarpur corridor remain hopeful it will lead to lasting change. Tej Kaur, who was leading a tour group of pilgrims, was all praise for the chief of Pakistan’s Army. “General Bajwa is leading the [peace] race. Just look around: the police, the military, management—all are here to facilitate us. What more do we need?” she said, noting that this was her 13th visit to Pakistan and the welcome had made her feel as if Baba Guru Nanak were still standing here with her.

Haneefa Bibi, a Muslim devotee who lives nearby, attributes her prayers at the shrine to the good fortune in her life. “This is because of the Baba,” she says, pointing toward her sons. People who come here to pray for their needs to be fulfilled do not leave disappointed, she adds. “We believe in the shrine of this saint. He is beloved to God,” she said, adding that she hopes the Kartarpur corridor would result in more job opportunities for people of her community.

Narinjan Singh Kapoor, born in Afghanistan’s Laghman province, was forced to flee the war-torn state ahead of the U.S. invasion in 2001. He applauds the Kartarpur corridor, saying it is in the best interest of both countries despite negative media coverage, primarily from India. “This is my third time visiting Pakistan, and each time the people here have treated us like honored guests,” he told Newsweek. “Many times, shopkeepers even refuse to accept payment from us because we are visiting their home,” he said, hoping he would be able to visit more Sikh holy sites in Pakistan during his next trip.

The ability to visit such sites, without having to set aside days of travel and visa hassles is what is most important to many pilgrims who attended the groundbreaking ceremony presided over by P.M. Khan. Maninder Singh, a devotee from Amritsar, climbed to the roof of the shrine and pointed out his hometown across the border. “I can literally see my city from here. If we walked in a straight line, it would take barely any time at all. Right now, I can’t reach my home without traveling hundreds of kilometers,” he says. If India and Pakistan see through this plan, however, all that may change. That, for many, is a goal truly worth striving for.

I am very humbled by the humanity of all the people I met during this pilgrimage. I could feel the love and warmth and hospitality of fellow Pakistanis. They are winning hearts and minds by this gesture of opening of this corridor. I pray that peace lasts forever over this sub continent and its population can inter mingle with each other with open hearts.

Let us keep hope that politics take a turn for good on each side of border and sanity prevail. No one ever wins with distruction.

It is a good initiative by the present Govt of both countries.