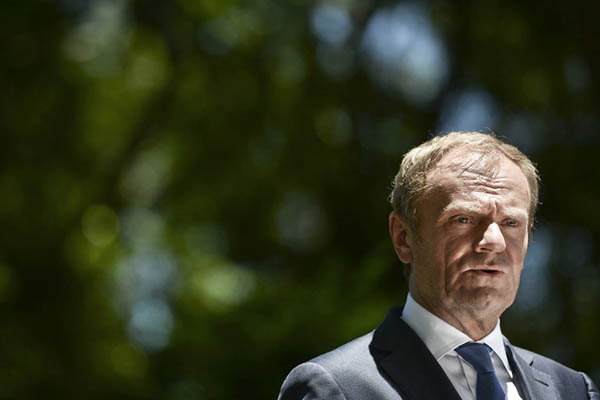 Tusk created a mini-sensation during a difficult E.U. summit on Brexit in Salzburg by posting a photo on Instagram of himself offering May a tray of cakes.

“A piece of cake, perhaps?” Tusk wrote alongside the picture. “Sorry, no cherries.” The comment was a biting reference to accusations by Brussels that May was “cherry-picking” the best parts of E.U. membership while leaving the bloc. Her divorce proposal envisions a U.K.-E.U. free trade area for goods through a common rulebook. But it would abandon the bloc’s right to the free movement of people and see Britain adopt its own migration policy.

The E.U. wants to make sure the remaining 27 members do not follow Britain’s example by trying to leave while preserving the benefits of free trade.

May’s plan was rebuffed in Salzburg on Thursday and Tusk’s post only added to what several British newspapers called her “humiliation.”

The prime minister tried to regain her footing by delivering a tough television address on Friday demanding that Britain be treated with “respect.” That message was picked up and taken a step further by Hunt in an appearance on the BBC’s Today radio program on Saturday. “Don’t mistake British politeness for weakness,” Hunt said. “We need to get the tone right and insulting her, insulting the British people on social media, getting into these standoffs where you’re calling people liars and so on is not the way we are going to find a solution to this difficult situation.”

Tusk issued a statement on Friday evening calling himself “a close friend of the U.K. and a true admirer of P.M. May.” French President Emmanuel Macron had earlier mocked some pro-Brexit British politicians as “liars.”

How the two sides intend to move forward with the clock ticking down to the March 29 Brexit deadline remains unclear. Pressure is mounting on May from Euroskeptics in her Tory party to abandon the so-called “Chequers” proposal for a less ambitious one that would not maintain such close E.U.-U.K. ties.

The Daily Telegraph reported that ministers intended to use a cabinet meeting on Monday to call on May to develop a “Plan B” alternative to Chequers.

May continued to insist on Friday that there were only two options on the table: trying to find a compromise on her proposal or no deal at all. She added that it was now the E.U.’s turn to make a counter-proposal.

“We now need to hear from the E.U. what the real issues are and what their alternative is so that we can discuss them. Until we do, we cannot make progress,” May said.

But Hunt refused to rule out looking into an alternative to Chequers such as the deal Canada signed with the E.U. in 2016. “I’m not dismissive of anything,” Hunt said. “We have been clear that we are prepared to negotiate on the Chequers proposal, but we can’t talk to a void.”

Canada has a much looser free trade deal that does not remove non-tariff barriers to trade. May said on Friday that a basic free trade agreement of that type would see Northern Ireland “permanently separated economically from the rest of the U.K.”