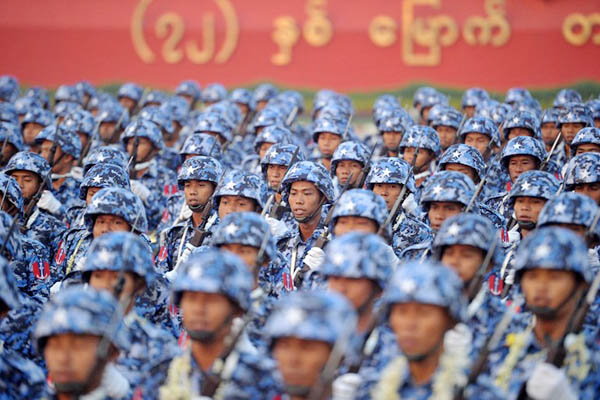 Britain said Tuesday it had suspended its educational training courses for the Myanmar military due to the ethnic violence in Rakhine state.

London said it had “deep concern” about human rights abuses and would not be resuming the military courses unless there was an “acceptable resolution” to the ongoing Rohingya crisis.

“The action the military are taking against the Rohingya people needs to stop,” British Prime Minister Theresa May told the U.K.’s Sky News in New York. “There will be no further defense engagement or training of the Burmese military by the Ministry of Defence until there’s a resolution of this issue.”

In London, a government spokesman said in a statement: “In light of the ongoing violence in Burma’s Rakhine state, the growing humanitarian crisis it has caused, and our deep concern about the human rights abuses that are taking place, we have decided to suspend the educational courses provided to the Burmese military until there is an acceptable resolution to the current situation. We call on the Burmese armed forces to take immediate steps to stop the violence in Rakhine and ensure the protection of all civilians, to allow full access for humanitarian aid and to facilitate the civilian government’s implementation of the Rakhine Advisory Commission’s recommendations in full.”

Britain’s junior foreign minister Mark Field has said the U.K. armed forces provided vocational courses, focused on language training, governance, accountability, ethics, human rights and international law to the Myanmar military. “Exposing them to how modern militaries operate in a democracy is more effective than isolating them,” he told parliament on Sept. 5.

“The U.K. is, and will remain, a very strong supporter of continuing the E.U. arms embargo” on Myanmar, he added.

Some 150 members of parliament wrote to Foreign Secretary Boris Johnson on Sept. 6 calling for the training program to be suspended.

Burma Campaign UK, which has been calling for an end to the training program ever since it started in 2013, said it was “incredible” that the halt had taken so long to reach. “Ending this training should have been a no-brainer, not something to dither over for three weeks while ethnic cleansing happens,” said the group’s director Mark Farmaner.

He called the training a “catastrophic misjudgment.”

“A major rethink on policy is now needed and a return to putting human rights first,” he said.