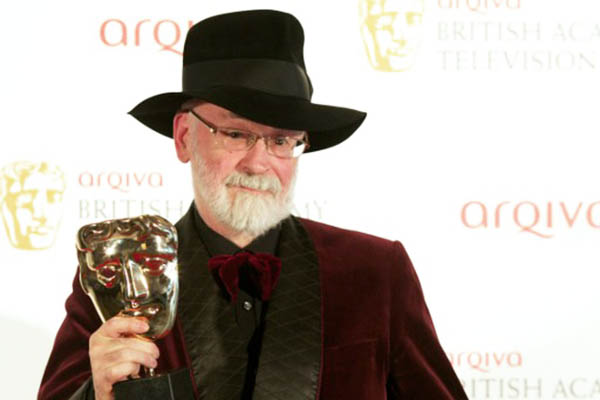 Famed for his Discworld series, the writer died in his bed after being diagnosed with early onset Alzheimer’s in 2007.

British author Terry Pratchett, whose science-fantasy Discworld novels are some of the best-selling works in English fiction around the world, died on Thursday aged 66 after a long battle with Alzheimer’s disease.

Pratchett, who sold more than 85 million books worldwide, “passed away in his home with his cat sleeping on his bed, surrounded by his family,” said Larry Finlay, managing director at Transworld Publishers. “The world has lost one of its brightest, sharpest minds,” Finlay said, adding: “Terry enriched the planet like few before him… his legacy will endure for decades to come.”

After being diagnosed in 2007 with a rare form of early-onset Alzheimer’s, which he called an “embuggerance,” Pratchett campaigned to raise awareness and reduce the stigma related to the disease.

Pratchett won worldwide fame and a cult following with his Discworld novels about a flat world balanced on the back of four elephants which themselves stand on the shell of a giant turtle. He wrote the first book in the series, The Color of Magic, in the late 1960s although it was not published until 1983. The 41st book was completed last summer, before he succumbed to the final stages of his disease.

A fan of science fiction and conventions from his youth, Pratchett wrote his first Discworld novel to make fun of the rival fantasy genre—but the target of his satire would come to define his work. “As all who read him know, Discworld was his vehicle to satirize this world: he did so brilliantly, with great skill, enormous humor and constant invention,” Finlay said.

One of the recurring characters in the Discworld novels was Death, a strangely endearing creature who is fond of cats—and whose utterances on the page are written in capital letters.

Many fans quoted from his works in their tributes on Twitter, including one of his most famous lines: “‘DON’T THINK OF IT AS DYING,’ said Death. ‘JUST THINK OF IT AS LEAVING EARLY TO AVOID THE RUSH.’”

Comedian Ricky Gervais also quoted Pratchett’s own words in tweeting: “‘It’s not worth doing something unless someone, somewhere, would much rather you weren’t doing it.’ RIP the brilliant Terry Pratchett.”

Fellow writers paid tribute to Pratchett’s work, which amounted to more than 70 books over the course of his career, with Booker Prize-winning Canadian author Margaret Atwood praising his novels as “playful, smart.”

British author Neil Gaiman recalled meeting Pratchett as a young journalist in a Chinese restaurant, beginning a friendship that would see them write apocalyptic comedy novel Good Omens together. “There was nobody like him. I was fortunate to have written a book with him, when we were younger, which taught me so much. I’ll miss you, Terry,” Gaiman said.

Pratchett’s daughter Rhianna tweeted her thanks to fans’ tributes, describing how she was typing “with shaking hands and tear-filled eyes.”

Born in Beaconsfield in southeast England, Pratchett began his career as a journalist before getting his first book published after interviewing the co-director of a publishing company. His affable manner won over fans he met at science fiction conventions. He would often wear a wide-brimmed hat and a self-effacing T-shirt that read: “Tolkien’s Dead, JK Rowling said no, Philip Pullman couldn’t make it. Hi, I’m Terry Pratchett.”

Fellow author Pullman said his death was “such a loss.” Writing on Twitter, he said: “I admired him very much, and I was proud to feature on his T-shirt.”

As his Alzheimer’s progressed Pratchett found it difficult to type and switched to dictating to his computer, his writing sustaining him as he campaigned for awareness of the disease and against Britain’s prohibition of assisted suicide. “Never dwelling on his own dementia, he used his voice to shout out for others when they could not,” said Jeremy Hughes, chief executive of the Alzheimer’s Society charity.

Prime Minister David Cameron also paid tribute to the author, who was knighted in 2009 and also had an asteroid named after him. “His books fired the imagination of millions and he fearlessly campaigned for dementia awareness,” Cameron said.

Pratchett is survived by his daughter and his wife, Lyn.