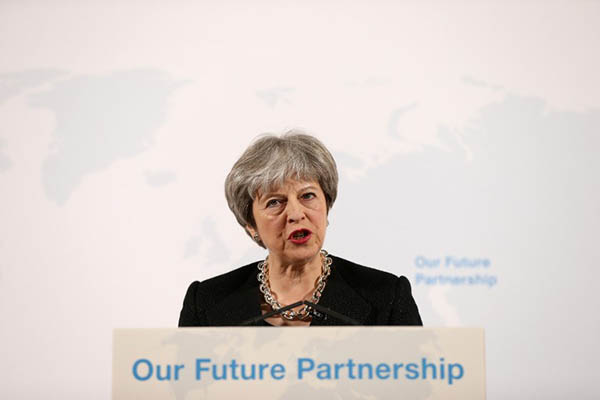 In speech, Theresa May acknowledges that U.K. will likely face new trade barriers once it leaves single market in March 2019

British Prime Minister Theresa May called on Friday for a wide-ranging free trade deal with the E.U. after Brexit, but admitted it was time to face the “hard facts” about the economic consequences of leaving the bloc.

In a detailed speech just weeks before starting negotiations on the future partnership with Brussels, May confirmed Britain would leave the European Union’s single market and customs union after Brexit in March 2019.

In its place she called for the “broadest and deepest possible agreement, covering more sectors and co-operating more fully than any free trade agreement anywhere in the world today.” But she acknowledged for the first time that Britain may suffer new trade barriers by severing its formal ties, a move driven by a desire to end mass migration and throw off E.U. rules.

“I want to be straight with people because the reality is we all need to face up to some hard facts… In certain ways our access to each other’s markets will be different,” she said. The E.U.’s chief negotiator Michel Barnier welcomed the “clarity” on Britain’s position, as well as “a recognition of trade-offs.”

He said her proposals would inform the bloc’s guidelines, which are expected to be drawn up next week before being approved by E.U. leaders at a summit in three week’s time.

In a speech in London, May suggested the new trade deal would include “binding commitments” to agree some regulations such as on state aid and competition. She repeated that she wanted to end the jurisdiction of the European Court of Justice, insisting there must be an independent arbiter of the agreement.

But in a bid to maintain “as frictionless as possible” trade in goods, May promised to commit to some regulations and minimum standards, while reserving the option for Britain to diverge.

The E.U. has previously dismissed the bespoke approach as “cherry-picking,” but May pointed out that each of the bloc’s existing trade deals with other countries was slightly different.

May’s Conservative government is divided on how closely Britain should align with the E.U., but a leading Euroskeptic, Foreign Secretary Boris Johnson, was quick to back her speech. The plan would keep close ties but allow Britain “to innovate, to set our own agenda, to make our own laws and to do ambitious free trade deals around the world,” he said on Twitter.

“Theresa May has again failed to bring clarity to the negotiations—and worryingly, she admitted that her approach will reduce our access to European markets,” he wrote on Twitter.

E.U. leaders have been sharply critical of the prime minister’s optimistic view of what she could achieve, but had been pressing for details as the start of formal negotiations comes closer. Talks on the terms of the withdrawal and a transition period are already underway, and Britain hopes a trade deal can be agreed by the end of the year.

John Springford, deputy director of the Centre for European Reform, said May had “advanced a plan that the E.U. will not accept.”

“We are heading for something much more economically damaging—unless she changes her red lines.”

May has ruled out staying in the single market or a customs union with the E.U. because it would stop Britain signing outside trade deals. Following May’s speech, Irish premier Leo Varadkar said he remains “concerned that some of the constraints of leaving the customs union and the single market are still not fully recognized.” Warning “time is short,” he urged Britain to present “more detailed and realistic proposals.”

Northern Ireland will have Britain’s only land border with the E.U. after Brexit, as the Republic of Ireland is remaining in the bloc, and all parties want to avoid a hard border, over fears it could upset the island’s fragile peace.

Earlier this week tensions rose when the E.U. published a draft treaty suggesting Northern Ireland could stay in a customs union while the rest of Britain remained outside.

The proposal is a fallback option if London fails to come up with a better solution to avoid new customs checks with E.U.-member Ireland. But May reacted with outrage, and repeated on Friday that she would “not allow anything that would damage the integrity of our precious Union.”

She insisted that it was possible to avoid physical checks through technology and schemes such as trusted trader programs, although is yet to publish detailed proposals.