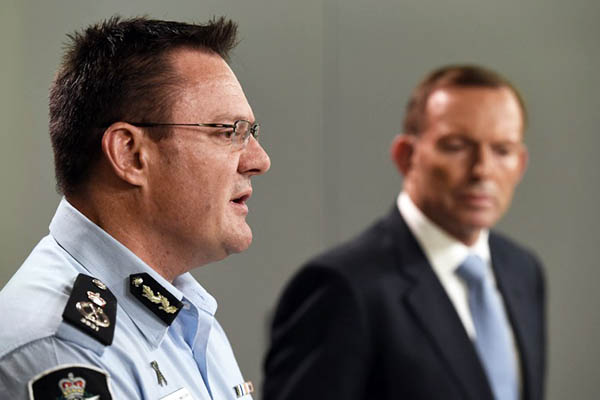 Fifteen-year-old urged Australia-based man to ‘break into someone’s house’ to practice beheading ahead of planned attack.

A British teenager on Thursday admitted to inciting an Islamic State-inspired attack on police officers during an Anzac Day parade in Melbourne as part of World War I anniversary commemorations this year.

The 15-year-old, who was 14 when he was arrested, sent thousands of instant messages to Australia-based 18-year-old Sevdet Besim over a 10-day period, prosecutor Paul Greaney told the court. “Those messages reveal the intentions of the plotters and their targets, along with their motivation, which may be summarized as support for ISIS and their enthusiasm for the attack,” Greaney said.

The bespectacled teenager, who wore a grey shirt and tie, cannot be named under English law because of his age. He entered his guilty plea at the hearing at London’s Central Criminal Court, the Old Bailey, via video link from a court in Manchester, northwest England.

The boy, who was arrested in nearby Blackburn on April 2, is to be sentenced on Sept. 3.

Judge John Saunders said he had ordered pre-sentence reports because he wanted to find out if there had been any “indoctrination” of the defendant. “Dealing with someone of this age is an extremely difficult sentencing process and I will need all the help I can get,” the judge told the court.

The boy was charged with having “incited a person to commit an act of terrorism wholly or partly outside the U.K., namely during an attack on a parade to commemorate Anzac Day in Australia” between March 15 and 26. A second charge of inciting a beheading in Australia was dropped by the prosecution.

Greaney said that as part of their preparations “the defendant sent Sevdet Besim a message that read, ‘suggest you break into someone’s house and get your first taste of beheading’.”

“Sevdet Besim responded to say that this seemed ‘a little risky’ and that aspect of the preparations appears then to have drifted away,” Greaney added.

Besim and another Melbourne teenager, Harun Causevic, have been charged with conspiring to commit a terrorist act, allegedly at a parade on April 25. They had allegedly planned to run down police officers with a car, behead them and then shoot other people, according to Australian media reports.

Besim and Causevic were reportedly being monitored because of their contact with a man who was shot dead by police in Australia last year after stabbing two officers.

On Anzac Day, ceremonies are held to remember Australian and New Zealand Army Corps troops who fell at Gallipoli, a fierce 1915 battle in modern-day Turkey that ended in defeat for Allied forces, and with more than 100,000 people dead.