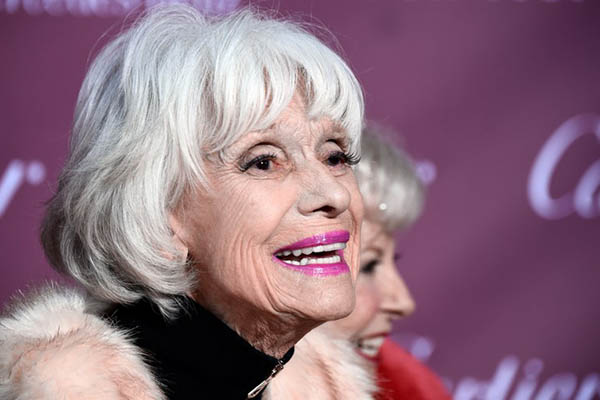 Glittering Broadway icon Carol Channing, who starred in hit musicals including Hello, Dolly! and Gentlemen Prefer Blondes, died on Tuesday, her publicist said. She was 97.

The towering platinum-blonde actress with a gravelly voice, a beaming smile and eyes like saucers wowed audiences for more than five decades, working into her 80s. “It is with extreme heartache, that I have to announce the passing of an original Industry Pioneer, Legend and Icon,” her publicist B. Harlan Boll said in a statement, saying Channing died at her home in Rancho Mirage, California of natural causes.

“It is so very hard to see the final curtain lower on a woman who has been a daily part of my life for more than a third of it,” he said. “Saying good-bye is one of the hardest things I have ever had to do. But I know that when I feel those uncontrollable urges to laugh at everything and/or nothing at all, it will be because she is with me, tickling my funny bone.”

Channing first dazzled critics in December 1949 as gold digger Lorelei Lee in Gentlemen Prefer Blondes, signing the show’s signature anthem, “Diamonds Are a Girl’s Best Friend” night after night. “Perhaps once in a decade a nova explodes above the Great White Way with enough brilliance to reillumine the whole gaudy legend of show business,” wrote Time Magazine of the performance.

She appeared in other shows in the interim, but 15 years later, she would take on the role that defined her career—the title character, a matchmaker, in Hello, Dolly. She went on to play Dolly more than 5,000 times—winning a Tony for the role in 1964, and later receiving a Special Tony Award in 1968. And in 1995, she received a lifetime achievement award at the Tonys, Broadway’s top honors.

Late in her career, she did television guest appearances and did voice work on the animated series Family Guy.

Her sparkling stage presence mostly did not translate to the silver screen, but she did deliver one notable Hollywood performance in the film version of Thoroughly Modern Millie, for which she earned a Golden Globe award and an Oscar nomination, starring alongside Julie Andrews and Mary Tyler Moore. She also gave a young Clint Eastwood his first on-screen kiss in The First Traveling Saleslady (1956).

Born in Seattle on Jan. 31, 1921, Channing grew up an only child in San Francisco in a family of Christian scientists. After a short stint at Bennington College in Vermont, she moved to New York in pursuit of stage stardom, dedicating her life to the craft. Married four times, Channing is survived by her son Channing Lowe, an acclaimed editorial cartoonist. “Performing is the only excuse for my existence,” she told The New York Times in 1995. “What can be better than this?”

Kevin Spacey Comes Out as Gay After Assault...