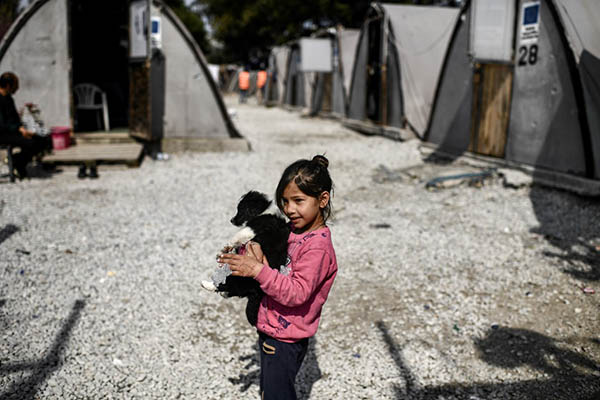 The olive grove next to the Moria camp on the Greek island of Lesbos is filled with makeshift tents and wooden and cardboard huts, after the sudden arrival of hundreds of migrants.

Fifteen-year-old Enaiat Khoshei lives with 12 other people in a temporary tent outside the camp, where the ground is muddy. The young Afghan arrived two months ago on the Aegean island and has seen the olive tree field fill up quickly in recent days.

On Thursday evening, 13 boats docked in Lesbos with about 540 people on board, including 240 children, authorities and local NGOs said. The Moria camp, a refugee registration and identification center, is once again overcrowded, four years after the migration crisis was at its peak in 2015.

The camp designed for 3,000 people is now home to almost 11,000, according to the charity Doctors Without Borders (MSF).

The number of migrant-loaded boats has boomed in recent weeks, taking Greek authorities, who were not prepared to accommodate as many refugees, by surprise. “July 2019 was the month with the highest number of arrivals since March 2016 and since then we have far exceeded this figure with more than 3,000 arrivals in August alone,” says Astrid Castelein, head of the UNHCR office on Lesbos. “The Moria center already hosts 10,000 people, almost four times the standard capacity as estimated by the UNHCR, and the number of departures from the island is very low, the situation requires urgent action,” she said.

Castelein says she wants the Greek government to speed up the transfer of the most vulnerable people, especially children, to more suitable accommodation.

On Friday, the Greek government announced that one thousand people from the Moria camp would soon be transferred to camps in northern Greece.

Foreign Minister Nikos Dendias summoned the Turkish ambassador to Greece on Friday to express “his great displeasure.” Dendias also reminded him of Ankara’s obligations under a 2016 E.U.-Turkey deal aimed at reducing the flow of asylum-seekers to Europe, according to a diplomatic source.

But for Enaiat Khoshei in Lesbos, time is endless and survival in the camp is difficult. He especially deplores the lack of access to health care: “My father has heart problems and cannot be examined by a doctor… I worry about him,” the teenager said.

Only two doctors work in the Moria camp. “We see children who are everywhere in the mud, cancer patients who are not cared for, women who cannot even get in the shade to nurse their babies,” says Paraskevas Moschou, the Greek public health agency’s coordinator. According to him, 6,000 people are waiting to be examined by doctors.

“We have nowhere to greet and register them,” said Vassilis Davas, the employee representative for the Moria center. “Police presence remains the same as when the camp only housed 4,000 people,” he complains, while also deploring the lack of interpreters.