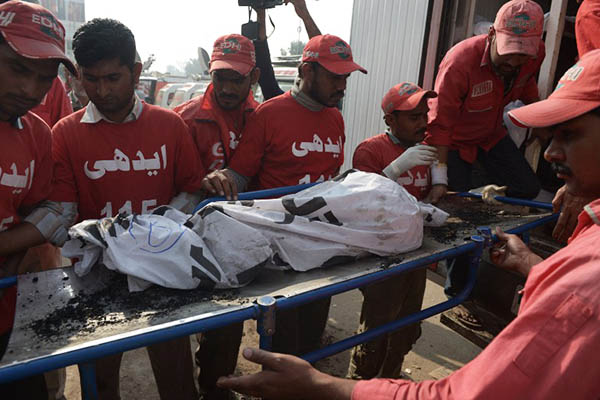 At least 62 people, including women and children, were killed early Sunday in Sindh province when their bus collided with an oil tanker, starting a fierce blaze that left many victims burnt beyond recognition.

Initial reports said the tanker was traveling on the wrong side of the road along a dilapidated stretch of highway, police said. It was the second crash involving major loss of life in Sindh in less than three months.

Authorities transferred the remains to a local morgue after taking samples for DNA testing in order to identify them. Dr. Semi Jamali at Karachi’s Jinnah hospital said another four passengers with minor injuries have been discharged. The bodies were “completely burnt and stuck to each other,” she earlier told AFP.

The overloaded bus was en route to the town of Shikarpur from Karachi when the collision occurred. “I was sitting on top of the bus when I saw a tanker hit it, and a minute later it caught fire,” said Ikhtiyar Ali. “There were three of us on the roof of the bus. We jumped to the ground to save our lives when we saw the fire.”

The tanker was carrying oil and a compressed natural gas cylinder was fitted in the bus, said Talib Husain, a relative of one of the victims. “After the collision the bus caught fire and, as a result, the CNG cylinder exploded,” Husain said. “One passenger bravely smashed the window from inside and rescued his family while the bus was on fire.”

Senior police official Rao Muhammad Anwaar said the bus “hit the oil tanker, which according to initial reports was coming in the wrong direction” and caught fire. “We are trying to ascertain if the driver of the oil tanker was solely at fault or whether the bus driver also showed negligence,” Anwaar said.

Another senior police official, Aamir Shiekh said it appeared that the poor condition of the single-track road contributed to the accident.

Pakistan has an appalling record of fatal traffic accidents due to poor roads, badly maintained vehicles and reckless driving. A total of 57 people, including 18 children, were killed in November last year when a bus collided with a coal truck near the town of Khairpur in Sindh.

After that crash police blamed the poor condition of the road and the lack of warning signs and said they would investigate the government department responsible—the first time such an investigation has been launched in the country.

Last April a bus smashed into a tractor-trailer in a high-speed collision in Sindh, killing 42 people, while in March a horrific crash between two buses and a petrol tanker left 35 dead, with many burned alive when the fuel ignited. The recovery equipment available to Pakistani emergency services is often basic. When crashes happen some distance from major towns, rescue efforts can take time and the injured have less chance of survival.