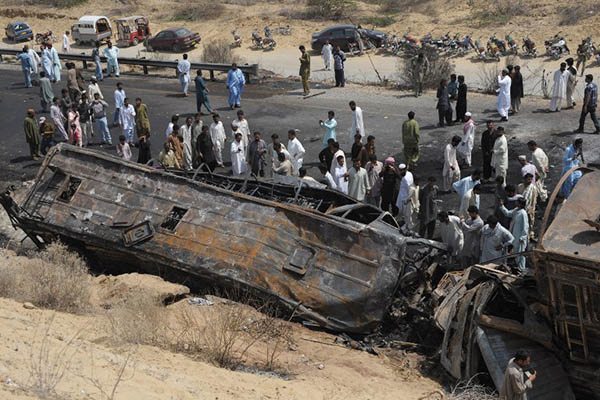 Onlookers gather at the site of a bus crash in Balochistan, March 2014. Rizwan Tabassum—AFP

At least 10 killed, another eight injured after passenger bus crashes while traveling from hill town to Rawalpindi.

At least 10 people including two children and as many women were killed when a bus fell down a hill just northeast of Islamabad, officials said on Sunday.

The bus, which was carrying 20 passengers from Murree to Rawalpindi, lost traction on a slippery road amid rainfall, rolling on its side as it fell down a slope.

“At least 10 people have been killed in the accident. Two of them are women and two children. Eight others are injured,” said Mudassar Hussain, duty officer at Murree police station. “Rescue workers are working to recover bodies and injured at the accident site,” he added.

The popular hill resort Murree is situated around 50 kilometers northeast of Islamabad and attracts tourists from across the country. Bus accidents are common on the mountainous track to the hill town because of careless driving and speeding.

Pakistan has one of the world’s worst records for fatal traffic accidents, blamed on poor roads, badly maintained vehicles and reckless driving. On Saturday, a collision between two passenger buses and a petrol tanker killed 35 people in southwest Pakistan, with many of the victims burning to death.