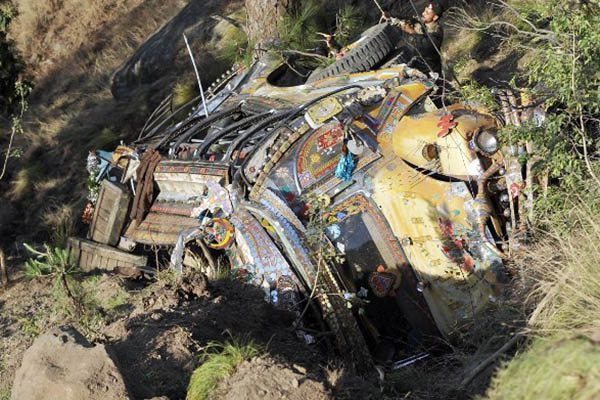 Wedding party was en route to their home when bus hit power lines and caught on fire.

The bus was taking family members back to their village after a wedding party in the town of Dadu in Sindh when it struck the power lines. “The bus immediately caught fire after an iron box on its roof hit the high-tension wire, killing 11 people and injuring 14 others,” said senior police official Irfan Baloch.

Four women and three children were among those killed.

Police and rescue officials, along with local villagers, struggled to save the injured from the fire, who were shifted to hospital.

Pakistan has an appalling record of fatal traffic accidents due to poor roads, badly maintained vehicles and reckless driving. In January, 62 people were killed when a bus collided with an oil tanker, starting a fierce blaze that left victims burnt beyond recognition.

This accident seems to be the fault of the electricity department because the bus did not actually collide with an electric pole but a trunk among the passenger’s baggage on the bus roof touched the low-hanging live high-tension wires above and caught fire causing electrocution and death of passengers. It is the duty of the electricity company or WAPDA, whatever name applies here, to ensure that all high tension wires must be hung 30 feet above the road surface, but everywhere we see 11kv lines passing only a few feet above the ground. In the rural districts such as Dadu as mentioned in the above article, and Alipur Road Muzaffargarh in Punjab commonly have residential houses with low-hanging HT lines passing over them. Someone high up needs to take to task the electricity authorities for this negligence and lack of respect for human life.