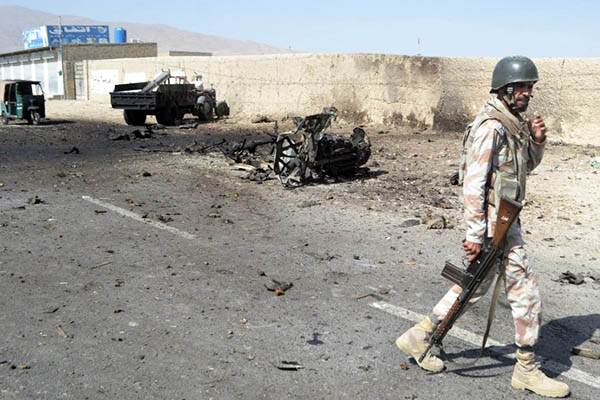 A security official walks past the site of a bombing, 2014. Banaras Khan—AFP

At least six killed, another 17 injured in bombing at Kohat in Khyber-Pakhtunkhwa province.

At least six people were killed and 17 others wounded when a bomb exploded at a bus stop in Khyber-Pakhtunkhwa province on Saturday, officials said.

“The blast occurred at a small bus stop in Kohat city. At least two vehicles were damaged in the explosion,” said Salim Khan Marwat, district police chief in the town of Kohat. “The explosion has left six people dead and 17 injured,” he added.

Fazal Khaliq, head of the emergency department at Kohat’s main government hospital, also confirmed the toll. In February, 12 people including two women and a child were killed in a bombing at the same bus stop.

It is the second attack on a passenger vehicle to hit northwest Pakistan in a week. On Thursday, a bomb blast on a coach in Peshawar killed at least seven people and wounded another six.

Meanwhile, two unknown gunmen killed a local politician and his bodyguard in the Swat valley. The gunmen, riding a motorbike, chased Ashraf Khan and his police guard when they were walking in their village in the Matta area.

Pakistan’s northwest has been targeted for more than a decade by Al Qaeda and Taliban-led militants based in the semi-autonomous tribal regions bordering Khyber-Pakhtunkhwa. The military launched a major operation in June to destroy the bases of the Taliban and other militants in North Waziristan. It says it has killed over 1,000 militants and lost 86 soldiers since the start of the current operation.