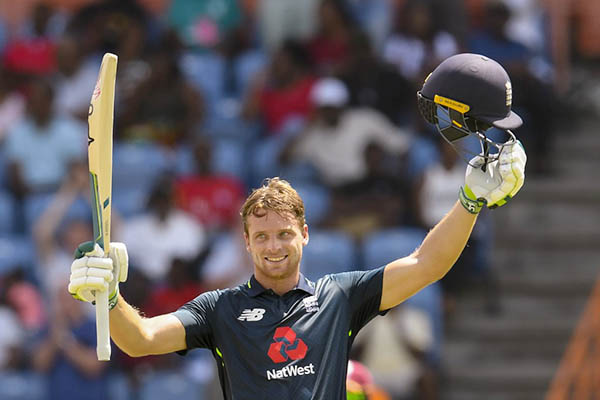 Jos Buttler’s stunning 50-ball century just about proved the difference as England beat Pakistan by 12 runs in a thrilling second one-day international at Southampton on Saturday.

New father Buttler’s 110-not out was the cornerstone of World Cup hosts England’s 373 for three. But Pakistan, thanks mainly to opener Fakhar Zaman’s 138, stayed in the game before a target of 19 off the last over, bowled by Chris Woakes, proved beyond them as they finished on 361 for seven.

Following Wednesday’s no-result washout at The Oval, victory left England 1-0 up in this five-match series. Man-of-the-match Buttler’s innings—played in front of a crowd that included his wife and baby daughter Georgia—featured nine sixes, including a straight drive off Hasan Ali that took him to three figures.

“It was great to have her [Georgia] here and I’m delighted to play that way back in an England shirt this summer,” said Buttler. “It was a fantastic game of cricket and great to come out on the right side.”

England captain Eoin Morgan had the best view while making 71-not out in an unbroken partnership of 162 with Buttler after winning the toss.

“He’s very good. He really is,” Morgan told Sky Sports. “I was in prime position to see the whole innings and his freakish knocks seem to be getting closer and closer together. He seems to have a gear that not many of us have. I certainly don’t have it.”

Pakistan, chasing a national record 374 for victory, saw Fakhar and Babar Azam (51) put on 135 for the second wicket. But when both batsmen fell in successive overs, it seemed their chance of an improbable win had gone with them.

Asif Ali, however, ensured Pakistan stayed in the game with 51 before he was caught in the deep off David Willey, who held his nerve well to take two wickets for 57 runs in 10 overs.

Pakistan captain Sarfraz Ahmed, 41 not out at the finish, praised his side for the way they so nearly reached a winning total. “It’s definitely hard to take, getting so close, the way my team responded because it was not an easy target to chase,” he said. “I’m very proud of the team, the way Fakhar Zaman, Imam-ul-Haq and Babar Azam played, especially as the way they’re playing is a great sign for upcoming matches.”

Earlier, such was Buttler’s command his second fifty took a mere 18 balls, with the wicket-keeper making a ‘rocking the baby’ gesture—after the birth of his daughter two weeks ago—to celebrate his century.

This was the 35th time since their miserable first-round exit at the 2015 World Cup that England had posted a total in excess of 300—a feat they had achieved only 34 times in total prior to that tournament—an encouraging sign just weeks away from this year’s edition. Yet at one stage England’s decision to rest fast bowler Jofra Archer look like it might backfire.

Fakhar, the century-making hero of Pakistan’s 2017 Champions Trophy final win over India at The Oval, was soon driving the recalled Woakes for six and later twice struck the fast-medium bowler for cheeky scooped fours. He also swept and drove Adil Rashid for two fours in the leg-spinner’s first over.

But the wicket England needed came when Fakhar chased a wide delivery from Woakes and edged to Buttler, although it needed Morgan’s review to confirm the dismissal. In total, Fakhar faced 106 balls including 12 fours and four sixes.

The series continues at Bristol on Tuesday.