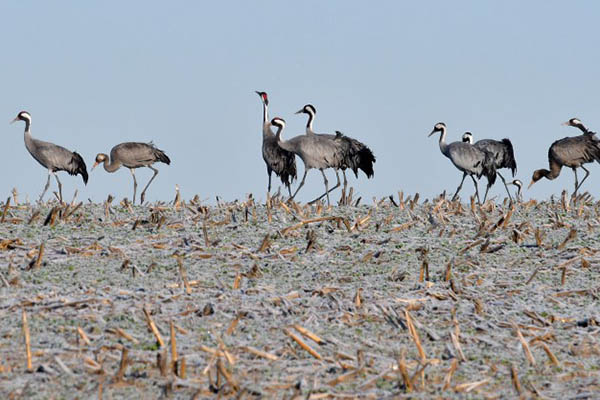 On a moonlit night in March, Abdul Hameed inspects cages of cranes, trapped over several years during their annual winter migration from Siberia to India. Despite decades of experience, 70-year-old Hameed has little hope he’ll be able to find new members for his “family” this year. The proliferation of illegal hunters and poachers has driven off the prized birds, with fewer and fewer numbers traveling the once-busy Indus Flyway to seek shelter in Pakistan during the cold, winter months.

“Once upon a time, we would have to pray to Allah to spare us from the flocks of birds who would travel to Pakistan every year just so we could get some rest,” he tells Newsweek. “Now, with more of them abandoning this route every year, we have not been able to capture any new birds in nearly two years,” adds the Khyber-Pakhtunkhwa resident, who started his trapping “hobby” in 1962.

Around one million birds, including a wide variety of ducks and waders, houbara bustard, cranes, teals, pintail, mallard, geese, spoonbills, raptors, and passerines such as warblers, pipits and buntings, used to migrate from Siberia every year, arriving in Pakistan in early September on their way to India and flying back to Central Asia around April. According to the World Wide Fund For Nature (WWF), cranes have faced the brunt of man’s excess in recent years, being ruthlessly hunted and trapped in Khyber-Pakhtunkhwa and Balochistan provinces. While many are captured for use as pets, hundreds die due to the inhumane conditions they are transported in by trappers.

Seasoned hunters such as Hameed have set up camps—small, brick-built structures—along the birds’ traditional migratory routes. But in recent years he can often go months without seeing a single crane, a decline he blames, at least in part, on unrest and militancy. “[The Afghan war] introduced automatic rifles to this region,” he says, noting that tribesmen started opening fire on birds with Kalashnikovs, scaring them off their old routes. “The younger generation considers hunting a business and butchers the birds without any respite,” he says angrily, adding that in his camp no one hunts between the hours of sunset and sunrise.

The Khyber-Pakhtunkhwa government is aware of this. In addition to illegal hunting, the provincial Forestry, Environment And Wildlife Department blames deforestation, pollution/urbanization, decline of water levels, and aerial firing for a decline in migration. In recent years, the government has established several checkpoints, one of which is near Hameed’s open-air camp, to warn residents against the penalties they could face for illegal hunting. The trapper, who is often accompanied by up to a dozen friends and family members, says these are mostly eyewash; “They merely fulfill their obligations. They know we have a permanent camp here and as long as we don’t use firearms or damage the local area, they leave us alone.”

Safdar Ali Shah, the chief conservator of wildlife in Khyber-Pakhtunkhwa, defends his government’s efforts to protect migratory species. “There is no illegal hunting in Khyber-Pakhtunkhwa,” he says, adding that live trapping of birds has also been banned. However, the practice of hunting continues unabated through special waivers. Last year, the Khyber-Pakhtunkhwa government relaxed its ban on crane hunting, allowing each “camp” to legally hunt 10 pairs of cranes. While restrictions remain on hunting without a shooting license, the minimal costs involved—a hunting camp could be set up for Rs. 5,000 while the fee to hunt a single crane was only Rs. 300—ensures hunting’s popularity. In addition, Pakistan’s Foreign Office has often used the country’s rich diversity to attract hunters from Arab countries, ostensibly to boost bilateral ties. In 2014 alone, a Saudi prince reportedly hunted over 2,000 endangered houbara bustards—the global population of the birds is believed to be around 100,000—despite any hunting of the bird being officially banned in Pakistan. This practice has continued despite concerns from activists and the country’s courts, with the current Pakistan Tehreek-e-Insaf-led government also permitting Saudi and Qatari royal families to hunt the birds earlier this year.

According to Shah, the overall decline of migratory birds has many factors. “Our historical wetlands no longer exist, as population growth has transformed many into housing colonies and commercial complexes,” he says. The use of pesticides and insecticides has reduced their food supply, while the Afghan war is also believed to have impacted migration, though, Shah admits, this has yet to be scientifically proven.

Shah maintains that several species of birds are still plentiful, but notes cranes have suffered the worst in recent years. “Four different kinds of cranes used to pass through Pakistan—two of them are now endangered due to illegal hunting,” he says, blaming hunters for separating lifelong bond pairs and destroying future generations. 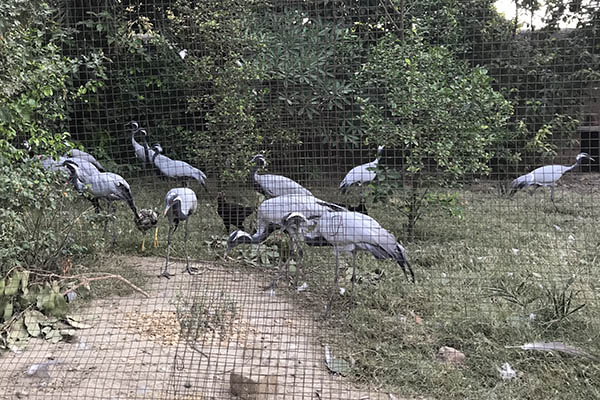 There is growing support for Shah’s views that hunting is destroying traditional migratory routes—including among hunters. Haji Abdul Qayyum, a member of Hameed’s party, has hunted cranes for several years. He blames excessive poaching for the fewer birds of recent years. “The wildlife officials have limited checkpoints and it’s difficult for them to man the area,” he says. “Many of the birds have shifted to Sindh and Balochistan, and the hunters have started following them there too.” But there are some who disagree.

Hakeem Khan has hunted and trapped birds in Khyber-Pakhtunkhwa for nearly five decades. He recalls a time when locals would capture hundreds of quails daily without noticing any decrease in overall numbers. “The birds haven’t disappeared due to hunting; it’s because of aerial firing. Their numbers are the same,” he claims despite scientific evidence to the contrary, “it is just their routes that have changed.”

Qayyum laments how what was once a hunting camp has instead become a picnic spot. “The 70s and 80s were the best time for hunting,” he says. “We did not hunt for commercial purposes but the younger generation, in their greed, have resorted to overhunting.”

Whatever the true cause, it is clear that human activity is to blame. Officials admit that in addition to hunting, land reclamation and deforestation, climate change and fragmentation and degradation of habitats, have all helped to discourage birds from migrating through Pakistan. For crane enthusiasts, attracted to the birds’ size and beauty, unique calls, and complex behavior, this is tantamount to a national tragedy.

Haji Jalat Khan is a Pakistani national who lives in Saudi Arabia but returns home every hunting season to spend time with his cranes. “They recognize us even after six months,” he says. “Their love for their caretakers is so beautiful.”

A crane enthusiast, Khan once bought a bird that could honk on command for $2,000. The skill is priceless for trappers who wish to capture passing birds during the migratory season. “On moonlit nights, we urge our captured birds to sing, which fools the birds flying overhead,” he explains. “Once they swoop down, we can capture them.” The trick, says one veteran trapper, is to throw a string tied to an iron weight around the crane, entangling the bird’s neck, wings and feet and preventing it from flying away.

This method of capturing live cranes has been passed down from father to son and is considered a “humane” way to capture the birds by those of Hameed’s camp. They make it a point to clarify that capturing the birds alive and unharmed is a point of pride—and not a little status. “People come from all over Pakistan to hear our birds sing, to see them in person,” says one Hakeem Khan. Jalat adds that hearing the voices of his cranes relaxes him and wipes away the day’s tensions. According to Hakeem, the singing of his crane is more melodious to him than that of any human singer—and he treats them accordingly, making sure they get fed before he breaks his fast every morning.

“I get breakfast after I feed my birds. Some of them even join me for lunch,” he laughs, adding that he shares his meals with his companions. “My heart overflows with happiness when they seek me out over any other person,” he says. “This, to me, is pure love.”

But while Hameed and his friends were once acclaimed trappers, age is slowly beginning to catch up to them. The 70-year-old damaged one of his hands in an accident and is no longer able to trap his prized pets. “I am half a man now. I can’t fire guns or run very fast. But I cannot leave this passion,” he says, as he attempts to pass on his teachings to his younger companions.

One of the men taking up the mantle is his nephew, Asif Khan Marwat. A contractor by profession, Marwat says his uncle’s passion soothes him and brings him peace. “It is no more a waste of time than obsessing over war and conflict,” he says, referring to the recent standoff between Pakistan and India over Kashmir, even as the camp awaits birds that may never return to their old stomping grounds.

Killing for pleasure is odious, hardly an activity we should be touting.