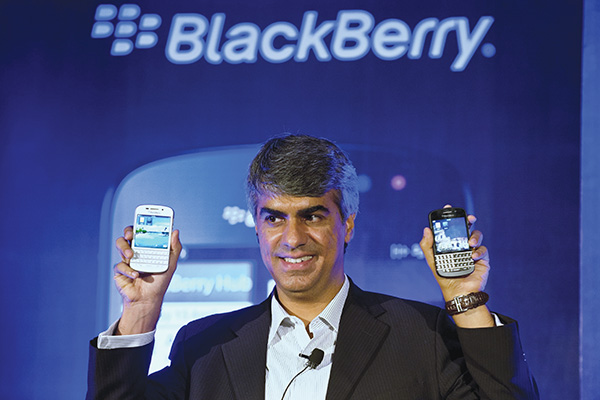 BlackBerry has what nobody wants.

Let’s face it: the reign of buttons is over. BlackBerrys, once the hallmark of the corporate set, have become second rate as iPhones and Androids have overtaken the cellular market. But this overwhelming adoption of touchscreens hasn’t stopped the flailing Research in Motion brand from unveiling its latest keypad-equipped BlackBerry Q10, released June 5. But the jazzed-up Q10 seems little more than an offering to appease BlackBerry’s dwindling devotees—and it must surely be the company’s last, as it struggled with lower-than-expected revenues in its fourth fiscal quarter last year. As a sign of the times, BlackBerry’s owner base shrank for the first time ever at the end of 2012.

Yet there are still some button-loving holdouts, yours truly included. Here seems an appropriate place to disclose an admittedly shameful secret: I still have a keypad BlackBerry, and I like it.

Many former keypad users have gone over to the touchscreen side. And why wouldn’t they? Keypads are noisy and take up space that could otherwise hold precious little app boxes on screens where even a square centimeter more of surface area makes a difference. To boot, I’m left virtually directionless with my BlackBerry’s absurdly subpar map app, and my roommate conspicuously puts on her headphones when I tap out long emails on my aging Bold 9900.

But don’t peg me as a nostalgist who listens only to vinyl and uses a Polaroid camera. It’s just that for the hopelessly faithful stuck in 2008, this is a way for us to put off those impossible-to-type-on, useless-app-burdened screens just a little bit longer.

At the end of the day, the slightly larger, square-screened Q10 certainly won’t have touchscreen users yearning for the keypad days of yore. Besides, in the not-too-distant future, when the next generation of Google Glass comes embedded in your contact lenses, we’ll tell our kids about the days when we had to tap commands on our cellphone screens. “With your fingers?” they’ll gasp.