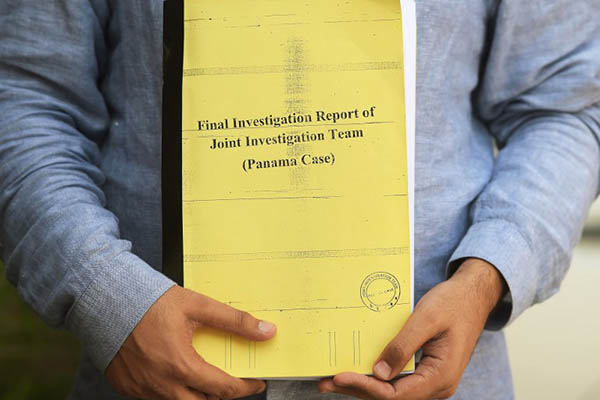 A typeface has sparked uproar in Pakistan after documents using the font were produced in a corruption case against Prime Minister Nawaz Sharif—despite being dated a year before the design was released.

Microsoft’s Calibri font was used to type certified papers naming Sharif’s daughter Maryam as a trustee for several of the family’s high-end London properties. The plush apartments are at the heart of the case against the Sharif family, with authorities and the opposition questioning the legitimacy of funds used to buy them via offshore companies. The identity of the legal beneficiaries has formed part of the probe, and the documents were meant to show that Maryam, who is Sharif’s presumptive political heir, was a trustee only.

But the papers were dated February 2006—a year before the font in which they are typed was in widespread commercial use, according to its creator. The same conclusion was drawn by a Joint Investigative Team (JIT) tasked by the Supreme Court with examining the corruption claims, which had London’s Radley Forensic Document Laboratory assess the documents.

Based on that assessment, the JIT rejected the papers as “falsified” in a report issued earlier this week, and seen by AFP. The conclusion, dubbed #Fontgate, set Pakistani social media alight with jokes and memes, and was widely repeated in mainstream press, adding fuel to opposition calls for the prime minister to step down.

Supporters of Sharif’s ruling PMLN party argued that Calibri has been publicly available since 2004. Microsoft did not immediately respond to AFP’s requests for comment.

But the font’s creator, a Dutch designer named Lucas De Groot, told AFP in a statement that it was “unlikely” Calibri had been used in any official documents in 2006. “[I]n my opinion the document in question was produced much later,” he said.

De Groot said he began designing Calibri in 2002 and sent the finalized version to Microsoft in 2004. After that, he said, it was used in beta versions that would have required “serious effort” to obtain.

The first Microsoft product to use Calibri on a large scale was Office 2007, he said, which was available to resellers by Nov. 20, 2006 and for retail by Jan. 30, 2007. “So in theory it would have been possible to make a document with Calibri in 2006,” he said. “However … It should have been taken from a beta operating system, from the hands of computer nerds. Why would anyone use a completely unknown font for an official document in 2006? If the person using Calibri was such a font lover that he or she HAD to use the new Calibri, then he or she should be able to prove that other documents were printed with Calibri in 2006, and these prints should be in the hands of other people as well.”

Maryam Nawaz, herself a regular Twitter user, has not yet commented publicly on the Calibri claim, though she vowed the report itself would be “decimated” in court.

The corruption controversy that has engulfed her family erupted last year with the publication of 11.5 million secret documents from Panamanian law firm Mossack Fonseca, revealing the offshore dealings of many of the world’s rich and powerful.

Along with Maryam, two more of Sharif’s four children—his sons Hasan and Hussein—were also implicated in the papers.

Sharif’s PMLN party insists the wealth used to purchase the properties was acquired legally, through family businesses in Pakistan and the Gulf. But the JIT report, commissioned by the Supreme Court in April, said there was a “significant disparity” between the Sharifs’ income and lifestyle.

The Sharif family has consistently denied the allegations against it and rejected the JIT report, with allies denouncing it as “trash.” The court is considering its next steps and will begin deciding what action to take next week.