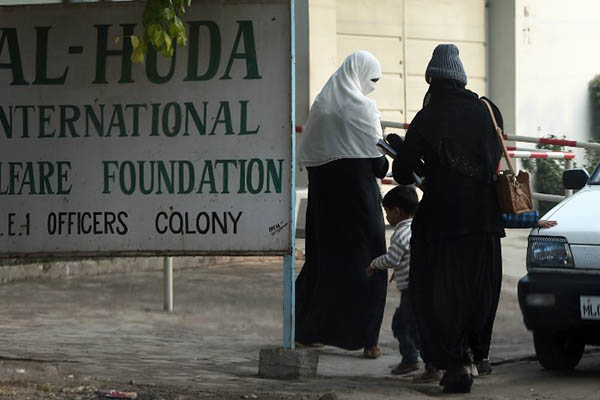 The woman who with her husband shot dead 14 people in California last week attended one of Pakistan’s most high-profile religious seminaries for women, a teacher at the madrassa said on Monday.

Tashfeen Malik, 29, studied at the Al-Huda Institute in Multan, which targets middle-class women seeking to come closer to Islam and also has offices in the U.S., the U.A.E., India and the U.K., said the teacher at the seminary who gave her name only as Muqadas. The institute has no known extremist links, though it has come under fire in the past from critics who say its ideology echoes that of the Taliban.

But her attendance offers fresh insight into Malik’s journey toward Islamic extremism, that likely began with her upbringing in Saudi Arabia, continued during her time as a student in Pakistan and culminated with her swearing allegiance to the Islamic State group shortly before embarking on her killing spree. Malik and her husband Syed Farook, 28, were hailed as “soldiers” of the self-proclaimed caliphate following the massacre on Friday at a social services center in San Bernardino.

Investigators suspect that Malik, who went to the United States on a fiancee’s visa and spent extended periods of time in both Pakistan and Saudi Arabia, may have radicalized her husband.  The probe is trying to establish if she had contact with Islamic radicals in either country.

“It was a two-year course, but she did not finish it,” the teacher Muqadas said. “She was a good girl. I don’t know why she left and what happened to her.”

The teacher did not say when Malik studied at the seminary, but fellow classmates at the Bahauddin Zakariya University said she had attended the madrassa after classes at the university, which she attended from 2007-2012.

Farrukh Saleem, a Karachi-based spokeswoman for Al-Huda told AFP: “We are trying to establish whether she attended Al-Huda as a regular student or was just a listener.” She added: “Government or law enforcement agencies have never suspected us of spreading extremism—instead we preach the peaceful teachings of Islam and the prophet of Islam.”

Al-Huda, founded in 1994, is one of the most well-known female madrassas in the country which are thought to teach hundreds of thousands of students each year. Unlike other such seminaries, it mainly targets Pakistan’s influential middle and upper classes, often holding religious study circles inside members’ houses.

One of Malik’s former classmates at the Bahauddin Zakariya University in Multan, where she studied pharmacology, told AFP she had attended the madrassa after classes, saying she “drastically changed” during her time there. “Gradually she became more serious and strict,” said the student, requesting anonymity. A second university student who also requested anonymity confirmed the account.

Arif Jamal, an analyst at the Washington-based Middle East Institute, said: “Her attendance suggests that she had embraced a more modern yet austere variant of Islam that was at odds with the Islam practiced traditionally by her larger clan. It may have made her more susceptible to the ideology of a transnational terrorist group like I.S.,” he added.

But he cautioned that Al-Huda’s graduates rarely become militants. “So Al-Huda attendance alone doesn’t answer the question of how she may have made the leap from being a conservative or even Salafi Muslim into a jihadist.”

Pakistan has pledged to crack down on religious seminaries suspected of being breeding grounds for intolerance or even fostering extremism, with the country’s information minister Pervez Rashid terming them “universities of illiteracy and ignorance.” However, the government’s efforts to rein in madrassas have prompted anger from many clerics who accuse the authorities of maligning religious leaders in a bid to build an “anti-Islamic narrative.”

And the head of Huda Farhat Hashmi lives and runs a branch of Huda inToronto.