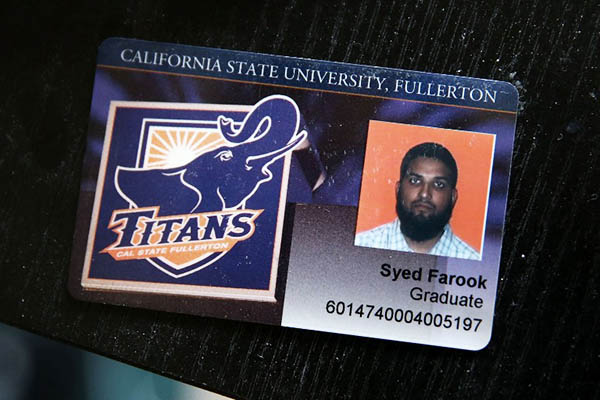 Italian newspaper interview cites Farook as being ‘obsessed’ with Israel.

The father of Syed Farook, who with his wife shot dead 14 people in San Bernardino, California, says his son approved the ideas of the Islamic State group and was fixated with Israel, the Italian daily La Stampa reported Sunday.

“He said he agreed with [I.S. chief Abu Bakr] al-Baghdadi’s ideas for creating the Islamic State, and he was obsessed by Israel,” La Stampa quoted the father of the shooter, also named Syed Farook, as saying. “I always used to say to him, be calm, patience, in two years’ time Israel will no longer exist,” he said, in remarks reported in Italian.

“Geopolitics are changing: Russia, China, America too, nobody wants Jews over there. They will put them all in Ukraine. Why bother fighting them? We did that before, and we lost,” the 67-year-old said. “But he didn’t want to know. He was obsessed” by the idea of fighting Israel, Farook was quoted as saying.

The younger Farook, 28, and his Pakistani-born wife Tashfeen Malik, 29, mowed down people at a social services center in San Bernardino on Wednesday, killing 14 and wounding 21. They were then shot dead by police.

The I.S. group hailed the couple as “soldiers” of its self-proclaimed caliphate in Syria and Iraq. Wednesday’s massacre, if proven to be terror-related, would be the deadliest such assault on American soil since the September 11, 2001 attacks.

The older Farook, who arrived in the United States from Pakistan in 1972, said that, as a teenager, his son “didn’t go to parties with his friends, saying that a good Muslim can only see his wife dance.” He said he “once” saw his son “with a pistol” and got angry with him about it.

Asked by La Stampa whether the son had been in contact with “terrorists outside the country,” the father said he didn’t know. U.S. investigators say they are examining a Facebook posting in which Malik is believed to have pledged allegiance to I.S. chief al-Baghdadi, made around the time of the attack.