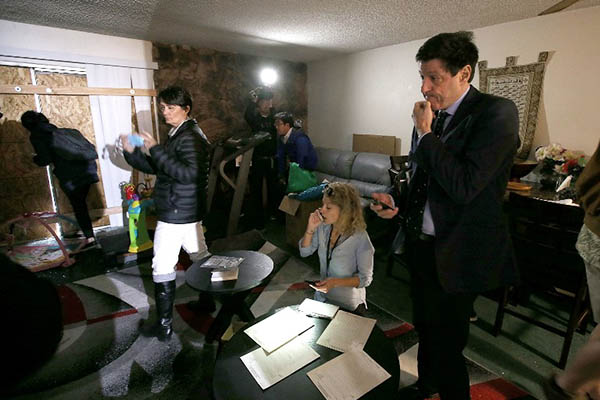 Some outlets criticize live broadcast of ID cards and photos as dozens of journalists swarm townhouse.

Baby toys, shredded files, a Quran, computer paraphernalia: the home of the California shooters was bizarrely—and controversially—thrown open to the media on Friday, offering a glimpse of the life of the couple behind the carnage.

Two days after U.S. citizen Syed Farook and his Pakistani wife Tashfeen Malik burst into an office party in San Bernardino and shot dead 14 people, media crews were given access by the landlord to the two-story townhouse where they lived with their six-month-old daughter. In a surreal scrum, dozens of journalists flooded into the home in Redlands, jostling for space as they rifled through children’s toys and family photos for clues to what drove the couple to commit mass murder.

The FBI, which is investigating the shooting as an “act of terrorism”, said it had turned the property back over to its owner and no longer controlled access, as experts voiced consternation that media were allowed to disturb the site.

AFP’s photographer Robyn Beck, among those permitted to enter, said it was mayhem inside. “People were touching everything, some reporters were removing pictures out of photo albums and photographing them,” she said.

Television crews displayed drivers’ licenses and social security cards on screen, and what some speculated may be the first known photographs of the 27-year-old Malik. There was a prayer rug, a Quran, and a children’s guide to Islamic manners.

In the kitchen, dirty dishes littered the sink area. A waste-paper basket was filled with shredded documents, apparently discarded by investigators. Journalists filed live broadcasts standing next to the baby’s crib, which brimmed with stuffed animals and colorful quilts—drawing scathing commentary from some fellow media.

“Nothing says we’re journalists bravely uncovering the truth like pawing around a child’s bed,” tweeted Mary Beth Williams, a writer for Salon.com.

Some outlets, including CNN, said they decided not to broadcast close-up footage of objects that could be considered sensitive or identifiable, such as identity cards. MSNBC acknowledged regretting some of its live shots from inside the home.

“We regret that we briefly showed images of photographs and identification cards that should not have been aired without review,” the network said.

CNN’s law enforcement analyst Paul Callan was appalled by the media crush. “I’ve never seen anything like this,” he said. “I think it indicates a shocking degree of negligence and really recklessness by law enforcement authorities here. You have a contaminated crime scene now.”

“This is the biggest visible screw-up in history,” agreed fellow CNN analyst Jonathan Gilliam. “A terrorist incident just happened and the reporters are going through and looking at IDs and pictures… It is all evidentiary.”

Pressed to explain why media were given unfettered access, the FBI said it no longer had control over the premises. “We executed a search warrant on that apartment. And last night we turned that over back to the residents,” David Bowdich, the assistant FBI director in charge of the Los Angeles office, told reporters. “Once we turn that location back over to the occupants… or once we board it up, anyone who goes in at that point, that’s got nothing to do with us.”

MSNBC said a reporter from another news organization had paid the landlord $1,000 for access to the premises, where investigators earlier found thousands of rounds of ammunition, a bomb-making laboratory and 12 pipe bombs. The owner pried open the door at around 9:15 a.m. and the rest of the media—followed by members of the public—dashed in behind, including one neighbor with her dog.

The elderly landlord, Doyle Miller, who ordered everyone out about 90 minutes later, admitted he was overwhelmed by the scrum. He told AFP the couple were “good tenants” who paid their rent every month. “I opened the door and I saw the damage,” he said. “It’s chaos in there.”

“I guess I don’t understand that type of person, it’s troubling,” he said. “They don’t have flags or pins on them, how can you tell?”

Both husband and wife were killed Wednesday in a wild firefight with police hours after the carnage at an office party attended by Farook’s co-workers in nearby San Bernardino. Relatives have been unable to explain how the young couple with an infant girl could have staged the country’s deadliest mass shooting since the Newtown school massacre in 2012.