California Shooters ‘Radicalized for Quite Some Time’, Says FBI 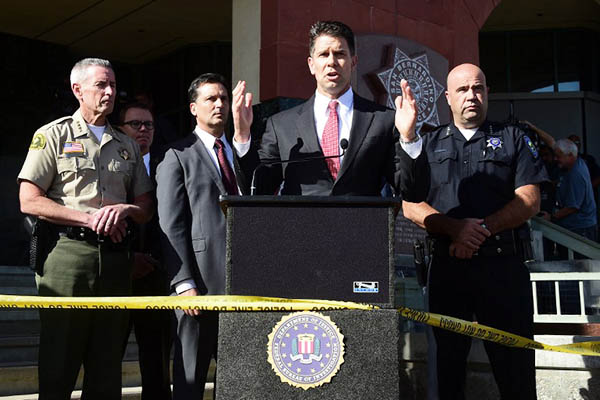 Authorities maintain there is no proof the couple was part of an organized group.

The husband and wife behind the shooting in California that left 14 people dead were radicalized for “quite some time” and both went for target practice before the massacre, authorities said Monday.

The update from the FBI on the terror probe into the Dec. 2 rampage in San Bernardino came after President Barack Obama vowed to destroy the Islamic State group and hunt down its followers, in an address to a jittery nation. The self-proclaimed Islamic State has praised the California attackers—Syed Farook and Tashfeen Malik—as “soldiers” of its self-proclaimed caliphate but did not say they were members of the group.

“As the investigation has progressed, we have learned and believe that both subjects were radicalized and have been for quite some time,” David Bowdich, the FBI’s assistant director in Los Angeles, told reporters on Monday. “The question for us is how and by whom and where were they radicalized?” he said. “Maybe there’s not a by whom. Often times it’s on the Internet.”

He said the couple, killed in a shootout with police following the gun attack on a year-end office party, went for target practice in ranges around the Los Angeles area, including in the days before the tragedy.

On Sunday, Obama said the attack was an “act of terrorism,” and the Federal Bureau of Investigation is investigating it as such. Authorities have, however, said there is no indication the couple was part of an organized larger group or cell.

In addition to two rifles and two handguns used in the attack at the party organized by Farook’s employer—the San Bernardino County health department—investigators found an impressive arsenal at their home. “The threat from terrorism is real, but we will overcome it. We will destroy [I.S.] and any other organization that tries to harm us,” Obama said Sunday, in only his third address from the Oval Office since taking office in 2009.

Farook, an American citizen, and his Pakistani-born wife met on an online dating site. Last year, he traveled to Saudi Arabia, where she lived, and they married. They left behind a six-month-old daughter. On Monday, ABC News broadcast a snapshot of the couple taken by immigration as they entered the United States as newlyweds in July 2014. It shows them both dressed in traditional Muslim clothing. Malik is wearing a black hijab that covers her head, and Farook is seen in a white tunic and skullcap.

Farook’s family have said they were at a loss to explain the couple’s rampage and have added that though both were devout Muslims, there was no indication they had become radicalized. Farook’s co-workers also were dumbfounded. They said he had attended the holiday party and then left, only to return with his wife, both dressed in black military-style clothing and heavily armed.

In an interview with the Italian daily La Stampa, however, Farook’s father said his son approved of I.S. ideology and was fixated on Israel. “He said he agreed with [I.S. chief Abu Bakr] al-Baghdadi’s ideas for creating the Islamic State, and he was obsessed by Israel,” La Stampa quoted the father of the shooter, also named Syed Farook, as saying. “I always used to say to him, ‘Be calm, patience, in two years’ time Israel will no longer exist,’” he said, in remarks reported in Italian.

But family attorney David Chesley said on Monday that he had spoken with the father, who denied making those statements. “He’s on four or five medications and he’s saying he didn’t make those statements,” Chesley told CNN. “He didn’t recall saying any of that.”