Calls for ‘Calm’ After London Stabbing 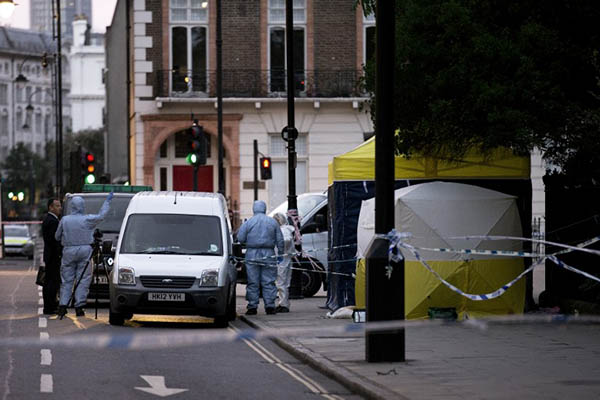 One killed, five injured in attack being investigated by police.

London’s mayor appealed for vigilance and calm on Thursday after a stabbing spree in the heart of the city that left one woman dead and five injured.

Police arrested a 19-year-old suspect and said that early indications suggested that “mental health was a factor in this horrific attack.” However, in the context of a string of recent attacks in Europe, authorities said they were keeping an open mind and that “terrorism remains one line of inquiry being explored.”

London police’s counter-terror chief Mark Rowley said there would be “an increased presence on the streets” of the capital on Thursday, including armed officers—an unusual sight in Britain.

Police arrested the teenager after reports of a stabbing spree in Russell Square, a quiet area close to several popular tourist attractions including the British Museum. Paramedics fought to save the life of a woman believed to be in her 60s but pronounced her dead at the scene. Two women and three men were also injured but no details have been released about their condition.

The suspect himself was taken to hospital after being immobilized with a Taser electroshock gun.

Xavery Richert, 22, a French tourist staying in a youth hostel on the square, told AFP: “I was buying a beer when I heard a woman shouting who was being chased by a man. I thought it was a bag snatching … she was not hurt. I came out for a cigarette, I went back, there were firefighters, police, and then I saw the body under a sheet. You could only see the feet sticking out.”

Russell Square resident Constantine Somerville said: “It’s such a safe area and very quiet especially at night—why would somebody commit an attack in such a quiet area?”

Mayor Sadiq Khan said police were seeking “to establish the full facts including motives” for the attack and urged the city’s residents to stay calm but alert. “I urge all Londoners to remain calm and vigilant… We all have a vital role to play as eyes and ears for our police and security services and in helping to ensure London is protected.”

Europe has been on edge for months following a string of recent jihadist-inspired attacks. Last month a driver ploughed a truck through a crowd leaving a fireworks display in the French seaside resort of Nice, killing 84.

Less than two weeks later, two men stormed a church in northern France, slashing the priest’s throat at the altar. Islamic State jihadists claimed that both attacks were carried out by their “soldiers.”

London was already on high alert following these attacks and others in Europe, including several in Germany. Since August 2014, the terror threat level in Britain has been “severe”—the second highest level, meaning an attack is “highly likely.”

Writing in the Mail on Sunday newspaper, Metropolitan Police chief Bernard Hogan-Howe said an attack was a question of “when, not if.”

The stabbing attack happened close to where one of the suicide bombers in the July 7, 2005 attacks detonated his device on the city’s public transport system. While the “7/7 attacks” which killed 52 people was the last large-scale terrorist assault on Britain, there have been a string of smaller incidents since.

On Monday, a court sentenced to life a paranoid schizophrenic man who tried to behead a commuter at a London Underground station in December in another I.S.-inspired attack. And in 2013, two British Muslim converts killed soldier Lee Rigby in broad daylight.