Calls in Indonesia for Repeal of Blasphemy Law 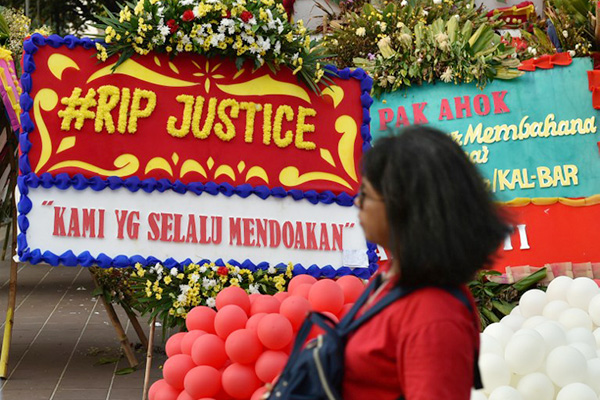 Indonesia is facing renewed calls to repeal its controversial blasphemy law after the jailing of Jakarta’s Christian governor, with critics pointing to a sharp increase in its use to target minorities.

Basuki Tjahaja Purnama—known by his nickname Ahok—was jailed for two years on Tuesday for blasphemy over comments he made about Islam while campaigning for re-election to the capital of the Muslim-majority nation, a far harsher sentence than had been expected.

Critics viewed the case as unfair and politically motivated. The allegations were pushed by hardliners who opposed a non-Muslim as governor, and sparked a series of mass protests that dented Purnama’s popularity and contributed to him losing the race for the Jakarta governorship to a Muslim rival last month. The allegations against Purnama centered on a lighthearted remark he made about his rivals using a Quranic verse to trick people into voting against him, which judges ruled amounted to blasphemy against Islam.

The blasphemy legislation has been on the statute books since 1965 but was rarely used before 1998, when three decades of authoritarian rule under brutal dictator Suharto—who sought to run the country along largely secular lines—came to an end. His downfall brought with it new democratic freedoms and increased interest in more conservative forms of Islam. But it also gave space for the growth of hardline Muslim groups and an increase in attacks on religious minorities, fueling concerns that the country’s inclusive brand of Islam was under threat.

Activists say the growing use of the blasphemy law curbs free speech and is one example of minorities coming under increased pressure. Local rights group Setara Institute said of the 97 blasphemy cases brought to court since the law was enacted, 89 of them were since 1998.

Phelim Kine, deputy director of Human Rights Watch’s Asia Division, said Purnama’s conviction made him “exhibit A of the law’s danger and the urgent need for its repeal.”

“The blasphemy law has been used to prosecute and imprison members of religious minorities and traditional religions,” he said.

Champa Patel, Amnesty International’s director for Southeast Asia and the Pacific, criticized the “inherent injustice of Indonesia’s blasphemy law, which should be repealed immediately,” while the United Nations urged a review of the legislation.

A recent case was the jailing in March of three leaders of a banned sect called Gafatar under the blasphemy law, with the men accused of luring followers to practice a deviant brand of Islam. Another example was in 2012 when Tajul Muluk, a cleric from the Shia Muslim minority, was sentenced to two years in prison for blasphemy, with judges saying that his teachings deviated from mainstream Islam.

The blasphemy law states that anyone found guilty of “expressing feelings of hostility” toward religion can be jailed for up to five years. It applies to any of the six officially recognized religions in Indonesia but in reality most prosecutions are brought against people accused of blaspheming Islam. About 90 percent of Indonesia’s 255 million people are Muslim but most practice a moderate form of Islam and the country is also home to substantial minorities of Christians, Hindus and Buddhists.

Despite growing pressure to repeal the law, this seems unlikely any time soon.

Religious affairs ministry spokesman Matsuki conceded there were concerns of misuse but said the government wanted to improve the legislation rather than axe it. “If we abolished it, more problems would arise,” he told AFP. “If blasphemy happens and we have no guidelines, there will be chaos.”