Cameron Backs Talks with the Taliban 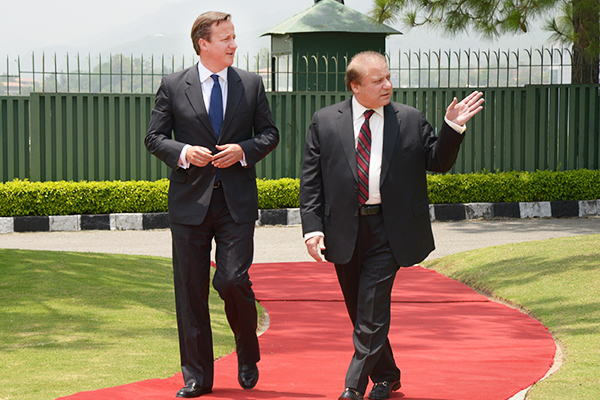 British Prime Minister David Cameron made a surprise visit to Afghanistan and Pakistan on Saturday, backing talks with the Taliban after his top general said the West missed a chance to strike a peace deal 10 years ago.

In Afghanistan, Cameron visited troops in Helmand and met President Hamid Karzai as the Kabul government and international powers try to revive peace efforts that recently collapsed in ignominy. “You can argue about whether the settlement we put in place after 2001 could have been better arranged. Of course, you can make that argument,” Cameron told Sky News in response to remarks by Gen. Nick Carter, the senior British officer in Afghanistan.

Carter told Saturday’s Guardian newspaper that an opportunity to try to bring peace to Afghanistan was missed when the Taliban were on the defensive in 2002 after they were ousted following 9/11. “The Taliban were on the run,” Carter said. “At that stage, if we had been very prescient, we might have spotted that a final political solution … would have involved getting all Afghans to sit at the table and talk about their future.”

Carter, deputy commander of the NATO-led coalition, acknowledged it was “easy to be wise with the benefit of hindsight” but Afghanistan’s problems were political issues that “are only ever solved by people talking to each other.”

More than a decade on, the search for a peace deal is now an urgent priority as 100,000 U.S.-led NATO troops prepare to exit next year and Afghan forces take on the fight against the rebels.

“There is a window of opportunity and I would urge all those who renounce violence, who respect the Constitution, who want to have a voice in the future prosperity of this country to seize it,” Cameron told reporters in Kabul. “The Taliban … are beginning to realize that they are not going to secure a role in Afghanistan’s future through terror and violence, but by giving up their arms and engaging in a political process.”

A Taliban office in Qatar that opened on June 18 was meant to foster talks but instead triggered a diplomatic bust-up when the insurgents used the title of the “Islamic Emirate of Afghanistan” from their 1996-2001 reign. Karzai, furious that the office was being styled as an embassy for a government-in-exile, broke off bilateral security talks with the Americans and threatened to boycott any peace process altogether.

Only hours after the Qatar office opened, a Taliban rocket attack killed four Americans on the largest military base in Afghanistan. Days later, a suicide squad targeted the presidential palace and a CIA office in the most audacious assault in Kabul in years.

“The attack that was organized near the presidential palace will not deter us from seeking peace,” Karzai said, describing the assault in which three security guards and all five assailants were killed as “peanuts.” “We want to talk peace … because that is what the country needs, that is what also the Taliban need,” he told the joint press conference with Cameron.

Karzai said that the U.S. security talks, which would allow Washington to maintain soldiers in Afghanistan after the NATO combat mission ends, remained suspended. “President Obama hopes to get the security pact between Afghanistan and America by October,” Karzai said. “I told him that we have some clear and unchangeable conditions in this regard, which is peace and security in Afghanistan, guarantee of Afghanistan’s national interest, a stable central government and a united Afghanistan.”

Obama recently said he anticipated “a lot of bumps in the road” but that a peace settlement with the Islamist militants was the only way to end violence in Afghanistan. More than 3,300 coalition personnel have been killed in Afghanistan since 2001, peaking at 711 deaths in 2010, according to the independent icasualties.org website. As NATO troops pull back, Afghan soldiers and police are increasingly responsible for tackling the Taliban, who were deposed in 2001 for sheltering Al Qaeda leaders behind the 9/11 attacks.

“Since my first visit to Helmand in 2006 there has been a remarkable transformation,” Cameron said. “Then there were almost no Afghan forces whereas today there are 340,000 capable and determined troops.”

Peace talks with the Taliban were previously anathema to many Western leaders, with Cameron’s predecessor Gordon Brown vowing in 2007 that Britain “will not enter into any negotiations with these people.”

“The president welcomed efforts being made for finding a peaceful solution to the long drawn conflict in Afghanistan. He expressed the hope that the efforts made would also take into account legitimate concerns of all the stakeholders,” Zardari’s spokesman, Farhatullah Babar, said.

Relations between Kabul and Islamabad are traditionally mired in distrust. The apparent headway made at a summit hosted by Cameron in February has since unraveled in a series of public rows.

“We hope that the U.K. will continue these efforts to seek sustainable peace and stability in Afghanistan,” Sharif told reporters after talks with Cameron. He supported Karzai’s position that any peace process should be “Afghan-owned and Afghan-led.”

“I have assured Prime Minister Cameron of our firm resolve to promote the shared objective of a peaceful and stable Afghanistan, to which the three million Afghan refugees currently living in Pakistan can return with honor and dignity,” said Sharif.

Cameron welcomed Sharif’s remarks about the “vital importance of the relationship” between Pakistan and Afghanistan. “I profoundly believe that a stable, prosperous, peaceful, democratic Afghanistan is in Pakistan’s interest, just as a strong, stable, peaceful, prosperous, democratic Afghanistan is in Pakistan’s interest, and I know that you and President Karzai will work together toward those ends,” Cameron said.