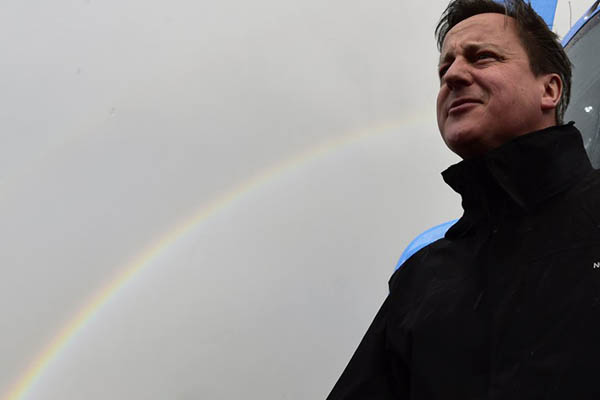 Prime Minister David Cameron’s Conservatives looked on course Friday for a surprise victory in Britain’s general election, which could redefine the country’s future in Europe and herald more austerity cuts.

Projections after the vote upended pre-election forecasts of a knife-edge contest with Labour and pointed to a landslide for Scottish nationalists that could reopen the question of independence for Scotland. “This is clearly a very strong night for the Conservative party,” Cameron said after being re-elected to his Witney seat in southern England.

Although he said it was “too early” to say what the final result would be, Cameron stressed that Britain now “must hold” a referendum on membership of the European Union that he has promised by 2017.

Labour leader Ed Miliband admitted it had been “a very disappointing and difficult night.”

“We haven’t made the gains we wanted in England and Wales, and in Scotland we have seen a surge of nationalism overwhelm our party,” he said.

As the pound rallied on currency markets, a projection by the BBC put the Conservatives at 325 seats—one short of a clear majority in the 650-seat parliament—against 232 for Labour.

As well as the Conservatives, the other big winners were the pro-independence Scottish National Party (SNP), which has so far won 55 of the 59 seats north of the border, up from just six seats that it held before Friday’s election. Its winners included 20-year-old Mhairi Black, Britain’s youngest M.P. since 1667, who defeated Labour’s campaign chief Douglas Alexander.

But it was a terrible night for the Liberal Democrats, junior partners in Cameron’s coalition since 2010, who lost at least two senior ministers. Their leader, deputy prime minister Nick Clegg, said the centrists had suffered a “cruel and punishing” night and hinted he could step down.

The success of the SNP could increase pressure for a fresh referendum on Scottish independence, even though that was rejected just last September.

Professor Patrick Dunleavy of the London School of Economics said the exit polls indicated that Cameron “looks like he’s there for five years”—the full length of a parliamentary term in Britain. “The paradox is David Cameron survives as prime minister but prime minister of a minority government which doesn’t have the votes to do anything radical,” he added.

If the Conservatives do fall short of a clear majority, they would have to team up with a smaller party or parties such as the Liberal Democrats or Northern Ireland’s Democratic Unionists to take power.

Election night parties were held across Britain as voters watched eagerly to see which way the election would turn. “I voted for the Conservatives because Labour is not competent on financial matters,” said Ben Woodthorpe, 39, as he sipped a beer in a pub in the City of London financial district.

The mood in the Labour camp was, by contrast, glum. “I am very disappointed because it looks like the majority is going towards the Conservative side,” said Nick Mabey, a Labour supporter in London. “Labour has been screwed by what happened in Scotland,” he said.

The pound rose to $1.5479 in Asian trading, its highest level since late February. “The Conservative Party are perceived to be more market-friendly than a Labour government and that’s really at the core of the game,” said Sebastien Galy, a currency strategist at Societe Generale bank.

Cameron would extend an austerity drive borne out of the 2008 global financial crisis, with the Conservatives vowing to bring the budget of the world’s fifth-biggest economy back to balance.

As the SNP turned the electoral map of Scotland yellow, its former leader Alex Salmond, who was replaced by Nicola Sturgeon last year, was among the lawmakers returned to the House of Commons. He summed up the sense of euphoria in the pro-independence party in which he is still a figurehead, saying the “Scottish lion has roared.”

“There is a roch [rough] wind blowing through the great glen of Scotland this morning,” he said. “There is a swing underway in Scotland the like of which has not been seen in recorded politics.”

Under Britain’s electoral system, a party needs to be able to command a majority in the 650-seat House of Commons in order to form a government. While Cameron may fall just short of that figure, British newspaper front pages reflected expectations that he will return to 10 Downing Street.