Home Latest News Can Qatar Deliver On Its Worker ‘Revolution’?

Can Qatar Deliver On Its Worker ‘Revolution’? 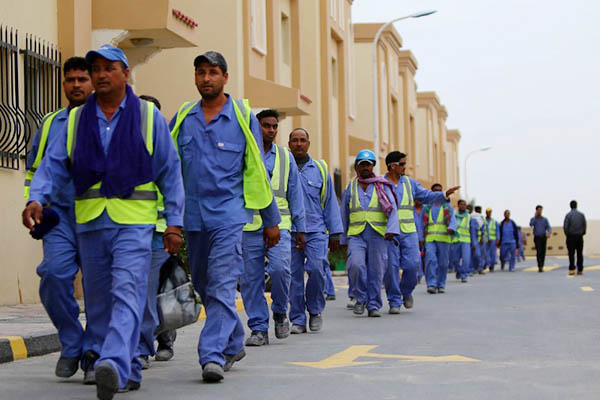 When the labor minister of World Cup 2022 host Qatar met one of the country’s most vocal critics on worker rights this month, the fact they were talking was a surprise. But the outcome of the apparently hours-long discussion between Issa Saad al-Jafali al-Nuaimi and International Trade Union Confederation general secretary Sharan Burrow was entirely unexpected.

They shook hands and agreed a wholesale package of labor reforms, which—if implemented—represent a massive change in conditions for Qatar’s two million migrant workers helping to ready the country for the World Cup.

Since being controversially chosen to host the event, for which it is spending $500 million a week, Qatar has been routinely accused of forcing workers to toil in conditions likened by critics to modern-day slavery. Those critics remain skeptical that Qatar will actually deliver on these latest promises, claiming they have backtracked before.

But Burrow believes this is a game-changer.

“For workers it’s a revolution,” she told AFP. “Being free to choose to work in the Gulf with appropriate rights and conditions.” The reforms agreed include the introduction of a minimum wage, job contracts being lodged with the government so they cannot be changed on arrival in Qatar and, crucially, employers no longer being able to stop staff from leaving the country.

This last point has been one of the major criticisms of Qatar by human rights groups and unions, including ITUC. Qatar also announced that the Cabinet had agreed to establish a “workers insurance and support fund.”

ITUC said the proposals meant the beginning of the end for “kafala”—under which all foreign workers need a local sponsor in order to work, maintain residency, and leave the country.

Burrow added that the minister had given “commitments” that the reforms would be carried out and change would begin in the “first couple of months of next year.” She even praised the “courage” shown by Qatar’s Emir Sheikh Tamim bin Hamad Al-Thani and Nuaimi in agreeing to the reforms.

It is a remarkable turn of events.

The formidable Burrow was once described to AFP, anonymously, as being “hated” by officials in Qatar and it was ITUC who first published the headline-grabbing figure of 1,200 workers dying building World Cup facilities. The reforms, now agreed by Qatar and the International Labor Organization, came ahead of a meeting that could have seen the launch of an embarrassing formal investigation by the U.N. agency into the World Cup host’s treatment of migrant workers.

On the surface it appears to deliver all that critics have long campaigned for. However, there remains skepticism that Qatar will really deliver true change.

Mustafa Qadri, executive director of Equidem, a human rights research organization, said the reform package was “a positive sign” but also stressed the need to wait for results. “We have heard this before in 2014 when the government came out and said it would abolish kafala and get rid of the exit permit,” he told AFP. “Then what we saw was that reform was slow and there were some changes but not the abolition of kafala.”

There is concern among campaigners that Qatar could still fail to deliver on its promise to let workers leave the country without permission of employers.

“The big question is if Qatar does not quickly demonstrate that they have acted in good faith and that they are serious about reform,” said Nicholas McGeehan, an expert on migrant workers. “I would have been a lot more confident if they had promised a lot less.”

In a statement, Amnesty International’s James Lynch said it would ultimately be the actions of the Qatari government, which would determine “whether this is a true game changer.”

Responding to the emerging skepticism, Saif Al-Thani, the director of Qatar’s Government Communications Office, tweeted that the hugely wealthy emirate would develop its labor laws in line with international standards.

There may also have been another factor at play for Doha’s apparent concessions—the ongoing Gulf crisis, which has seen Qatar boycotted by neighboring countries. Qatar has repeatedly claimed the boycott has impacted on the human rights of its citizens, and arguably the most vocal body during the nearly five-month-old dispute has been its National Human Rights Committee.

Claiming rights abuses by others, while being accused of the same thing with regards to migrant workers, is not an easy thing for Qatar to explain. By radically overhauling its treatment of migrant workers, Qatar would also distinguish itself from other states in the region and present itself as more progressive than its neighbors.

But despite the optimism, one organization remains beyond Burrow’s praise. “FIFA sat on the sidelines for more than five years,” she said. “They had the power to work effectively and did nothing. Now we can look forward to a World Cup with workers’ rights. FIFA becomes a beneficiary but no thanks to them.”