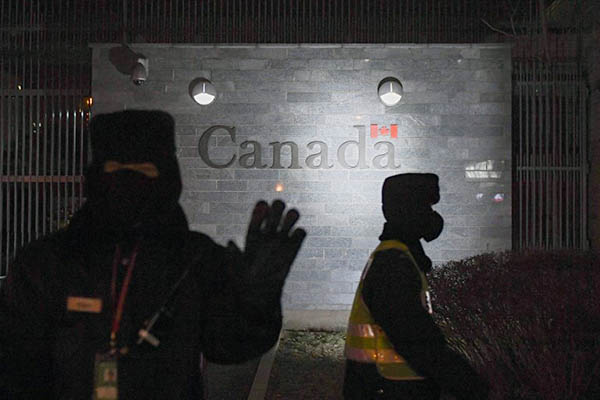 A guard tries to block photos being taken as he and a policeman patrol outside the Canadian embassy in Beijing. Greg Baker—AFP

Canada is warning citizens to “exercise a high degree of caution” when traveling to China after a Canadian man was sentenced to death on drug trafficking charges.

The revised advisory cautioned travelers of the “risk of arbitrary enforcement of local laws,” and noted that the “safety and security situation could change with little notice.”

The update came hours after a Chinese court on Monday sentenced Canadian citizen Robert Lloyd Schellenberg to death on drug trafficking charges after his previous 15-year prison sentence was deemed too lenient. Schellenberg, 36, had appealed against the court’s original verdict.

The sentence comes against the backdrop of Beijing’s anger over the arrest in Canada of a top executive from telecom giant Huawei last month on a U.S. extradition request related to Iran sanctions violations.

Ottawa has called for the Canadians’ immediate release, with the backing of the U.S., E.U. and several western nations.