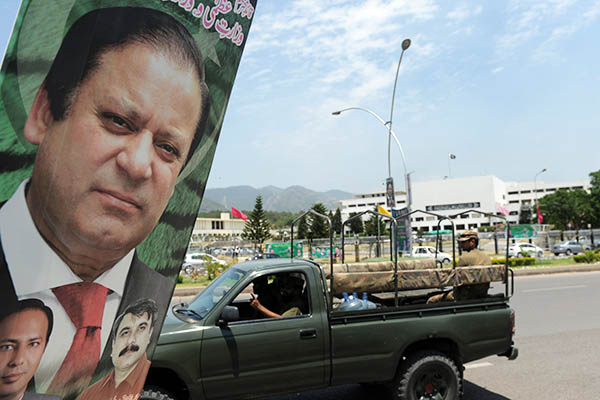 What does the Army gain from agreeing to protect Islamabad on the directives of the federal government?

The federal government has decided to call in the Army under Article 245 to protect the capital territory of Islamabad against any terrorist attacks. Or at least that is what the government says. The decision was taken on Friday, July 25, and disclosed to the media in an informal press conference by the interior minister.

Shortly after, a ministry spokesperson tried to ‘dispel’ the impression that Islamabad was being handed over to the Army: “…the Army is being called out for a limited time to assist the police and civil administration to obviate the possible threat of a terrorist attack and [improve] the security situation.”

Not surprisingly, there aren’t many buyers for the government’s argument that this extreme step is being taken to ‘obviate’ threat of terrorist attacks. The Protection of Pakistan Act (PPA), which encompasses the ‘whole of Pakistan,’ is already in place. The express purpose of the PPA was to help security forces ‘obviate’ such threats.

Injecting the last-resort, high-potency Article 245 into this situation is therefore a decision that appears to have reasons other than ‘obviating’ terrorist attacks.

But first, a look at Article 245, titled, Functions of the Armed Forces:

1[(1)] The Armed Forces shall, under the directions of the Federal Government, defend Pakistan against external aggression or threat of war, and, subject to law, act in aid of civil power when called upon to do so.

(2) The validity of any direction issued by the Federal Government under clause (1), shall not be called in question in any Court.

(3) A High Court shall not exercise any jurisdiction under Article 199 in relation to any area in which the Armed Forced of Pakistan are, for the time being, acting in aid of civil power in pursuance of Article 245 …

The external aggression reference can be ignore because Islamabad, until last news came in, was under no external threat, unless any attempt on Islamabad from other parts of Pakistan can be considered external aggression. The threat of war, too, is a bit of a stretch for any putative terrorist attack(s) and, in any case, that kind of war has been going on for a while now and Islamabad has had its share of big and small attacks.

So we are left with “act in aid of civil power when called upon to do so.”

Now, while one cannot discount terrorist attacks in any part of Pakistan, the probability of such attacks is greater in certain other parts of Pakistan than in Islamabad. What we do have, however, is a decision by Imran Khan’s Pakistan Tehreek-e-Insaf to march on the capital on Aug. 14 and camp in front of Parliament for as long as it takes for the government to concede to the PTI’s demand of mid-term elections. This is the dug-up Blue Area notwithstanding!

The government has panicked. Much like King Arthur in Monty Python and the Holy Grail,it has asked Brother Maynard to bring out the Holy Hand Grenade of Antioch to deal with Khan and his brood. The threat of terrorist attacks is a flimsy pretext for Army deployment to Islamabad under Article 245.

Is the government then signalling weakness to Khan and, by extension, the entire opposition? Is it prudent to signal weakness before going into a contest?

This is one way of looking at the decision. The other is that the government, by pulling the Army in, is signalling to the opposition, in particular to Khan, that the current civil-military leadership is in sync and neither wants instability at this stage. That if Khan remains adamant on descending on Islamabad, he will be contending not just against the PMLN but also the army. Is that a chance he wants to take?

A legitimate argument, it still does not give us the reasons for why the Army would want to be dragged into this muck. But it has been, because the government could not have made this decision public and issued a notification in this regard without first consulting with the GHQ.

So, if the GHQ has agreed to such a deployment, what could its calculation be?

This is an important question because it should be obvious that the GHQ is not doing this to save King Arthur and his Knights of the Roundtable. What’s in it for the Army?

First and foremost, it re-establishes the Army, yet again, as the ultimate arbiter in the system. The prime minister, generally known for being brash in dealing with the military, appears to have fallen in line. In trying to save himself from the political putsch by Khan, he has voluntarily allowed the same elephant to get into the room which, presumably, he has been trying hard to push out of the room.

Second, and allied with the first, it shows, yet again, that despite pronouncements to the contrary, the political system remains fragile and has not developed its internal dispute resolution mechanisms. Put another way, political actors still need to be guided out of the troubles of their own making.

Third, Khan’s long march and the government’s response show that the rules of the game remain, at best, secondary to Byzantine political moves, reminiscent more of shifting alliances and underhand deals than any institutional approach to problem solving.

Fourth, all of this adds up to one glaring fact: political leaders have lost out to the Army and the GHQ has reacquired its primacy. What happens, or doesn’t, on Aug. 14 will now be determined by the Army, not the political players.

And what’s the likely thinking in GHQ?

One, the military is singularly focused on dealing with the internal security threat. It wants full support on that from the government and the public and it is unhappy with political squabbles and also fine points of law that it feels hamstring it. The political government cannot really give to the military everything they want because argumentation is in the nature of politics and civil society thinking.

Two, while the military doesn’t want instability and distractions, it also knows there can be no tabula rasa. In fact, the paradox is that in trying to create enough space for itself to be able to do what it wants to, it has been indulging in a game of brinkmanship. In a classic game of brinkmanship, the balance is achieved through a realization on all sides that the pain is mutual and therefore no side must go overboard. In this case the military wants to inflict enough pain on the government to force it to fall in line. Seen from this perspective it will not want things to boil over.

The idea is simple: what will it do after it has got rid of Nawaz Sharif, assuming it does want to get rid of him?

There aren’t too many options. Will it go for a change in leadership within PMLN? Even if it wants to, Sharif will not bite. In that case, what options could it exercise? Khan is out. He is too full of sound and fury signifying nothing. The PPP just had a long, mostly useless turn. Other parties are too parochial in their political presence and while they are important as smaller building blocks, they can’t provide a foundation for the system.

A total uprooting of the system is not advisable. The Army wants primacy of place but not necessarily direct presence in the driver’s seat. More a navigator’s role than that of the pilot’s. A martial law option is also bad because it brings with it detritus from political parties, politicos with no hopes of being successful in an electoral system, the many flaws of the system notwithstanding. As past experience shows, such characters are more a liability than assets.

How does this pan out then? Does the Army send a signal to Khan to lay off?

Unlikely. Khan himself is in a commitment trap now and will come across as a political wuss if he backs off at this stage. But if he does march on the capital, the Army would not like to confront his flock. The Army knows that its weight counts until it comes across as an honest broker, concerned more about the state than safeguarding someone’s throne. If we count out the Musharraf way and if Sharif is unlikely to accept the Waheed Kakar way, then we are left with the Kayani approach.

Rewind to Sharif’s long march to get the judges restored. Remember the call that came to him, not from the presidency, but from Kayani’s secretariat. The march was cancelled, the judges got restored.

The Army’s calculation, in the event it doesn’t want things to go overboard, would be to let Khan march on Islamabad and matters to hot up and then step in and force the protagonists to disengage on the basis of give and take. Sharif will have to give some to save all; Khan will have to accept some to avoid losing all. The Army will come out as the rose between two thorns.

Meanwhile, we will continue talking about how to get the elephant out of the room and bash the praetorian tendencies of the knaves in uniform.

We never know what tomorrow may bring. Therefore, preventing danger to happen is a clever thing to do. Yet, when we’re in a situation between life and death — we can also think if we could really escape? However, prevention is still better that cure and as we quote “it’s better to be ready than to be sorry.” And for this, I would suggest this safety application that I’m currently using for me and my family. It is a Panic Button installed on a Smartphone’s and it allows us to alert all the member of our family when danger comes. It can also identify the exact location and have the ability to search the address of any family that you wanted to locate. You can browse their other features with this link: http://safekidzone.com/?a_aid=52f12fafd5de8