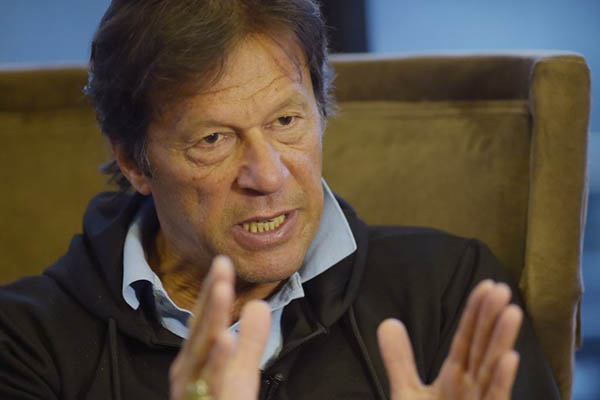 Pakistan Prime Minister Imran Khan recently witnessed his ministers going each other’s necks while surveying the by-now obvious dysfunction of his government. His party, the Tehreek-e-Insaf (PTI), had to deal with a broken economy when he came to power in 2018 but his troubles were later magnified by his charisma and a heroic rise in popularity that left a lot of personality development gaps in his strategy. He was aggressive as a fast bowler, a “crusher” as a cricket captain that gave no quarter, and knew no “middle ground” where politics of today thrives on compromise and accommodation.

Almost two years into the tenure of his government, he has his opposition on the run, but his party has split under pressure from natural calamities such as COVID-19 and swarms of invading locusts. He damaged the political system with use of intemperate language that in turn ruined the image of his party workers, who in turn lacked character when it came time to bear up under pressure.

Minister for Science and Technology Fawad Chaudhry, who was booted out of his first post as information minister last year, chose to come on TV this week and informed Pakistanis about the internal collapse of his party before it has even completed two years in power.

Chaudhry claimed that the prime minister had appointed as ministers “weak persons who required dictation for every matter, which damaged P.M. Imran Khan’s vision.” This is obviously taken to apply to Usman Buzdar (sheep-herder), chief minister of Pakistan’s largest province in terms of population and political strength, who suffers from what appears to be speech impediment but persuades many to think of him as a low IQ individual. Khan was able to cobble together governments in only two provinces—Punjab and Khyber-Pakhtunkhwa—but in Punjab he needed allies who he ended up treating not too well. His party leads the opposition in Sindh but his advice of aggressive discourse during the coronavirus pandemic has discredited his badmouthing lieutenants there, too.

Khan’s advantage was that his two major opponents, the Pakistan Muslim League (Nawaz) and the Pakistan Peoples Party, were on the run from the Army—accused by many of having rigged the 2018 polls to bring him to power—and the National Accountability Bureau (NAB), which hunts down his opponents on the basis of its satanic charter. So crippled is his opposition by NAB that Pakistan would not be able to find his replacement for a long time. After lambasting his already comatose opposition, Khan has also managed to booby-trap his own party while brandishing his cheap-shot worry beads in public.

His over 50-strong cabinet is riven with lethal underground rivalries among ministers who earlier favored the party with big financial handouts. Some of them are advisers after failing to come through elections and are now resented by partymen for their brazen incompetence. An infighting trio that has come to the notice of the man on the street is: ex-general secretary of PTI Jahangir Tareen, Federal Minister for Planning, Development, Reforms and Special Initiatives Asad Umar, and Foreign Minister Shah Mehmood Qureshi.

First, Tareen—who was ousted from politics by the Supreme Court for undeclared assets—used his influence over Khan to get rid of Umar as finance minister. Then, Tareen and Qureshi locked horns over supremacy in south Punjab and in Islamabad; and now Tareen is in hiding in the U.K. to avoid being jailed for a great sugar scam kicked off by a cartel of sugar manufacturing companies said to be headed by him.

Khan needed coalition partners in three provinces—Punjab, Khyber-Pakhtunkhwa and Balochistan—as well as their votes in the National Assembly. The Muttahida Qaumi Movement-Pakistan (MQM-P), Grand Democratic Alliance (GDA), Pakistan Muslim League-Quaid-e-Azam (PMLQ), Balochistan National Party (BNP) and Balochistan Awami Party (BAP) are all unhappy with him in various degrees for not carrying out the concessions he had pledged to them and are now threatening to jump ship. More and more politicians from within the party are appearing on TV and criticizing him for allowing his army of ministers to spoil their standing in their constituencies.

Khan’s charisma is clearly folding. His abomination of the opposition—he rarely attends parliamentary sessions where he is Leader of the House and doesn’t talk to opposition leaders at all—is no longer admired by the jobless common man, now under attack from both COVID-19 and hunger. His foreign policy of defiance has sagged after he dumped the Gulf Arabs under the influence of Turkey’s Erdogan and Malaysia’s Mahathir Mohammad before reversing his decision under press of Saudi Arabia; and India didn’t make peace with him under Narendra Modi, who is actually in the process of kicking out Pakistan’s embassy personnel from New Delhi.

He is called “selected” instead of “elected” by an opposition that resents the way his otherwise nonfunctional ministers keep subjecting them to abusive language. The Pakistan Army, which he leans on, is feeling the pressure from Afghanistan where it plays its cards on the basis of the repeatedly unreliable Afghan Taliban and their internationally abhorred partners. On the other hand, India has much better relations with Pakistan’s immediate neighbors—Iran, the Gulf and Central Asia—than Islamabad.

Unfortunately, Khan is bound to react wrongly to the recent China-India scrap, and would no doubt rile the Indians more against his government, not realizing that the much-publicized scuffle in Ladakh might soon be tactfully resolved by the two neighbors involved in big-time bilateral trade.