Home Lightbox Care for the Caretakers

Care for the Caretakers 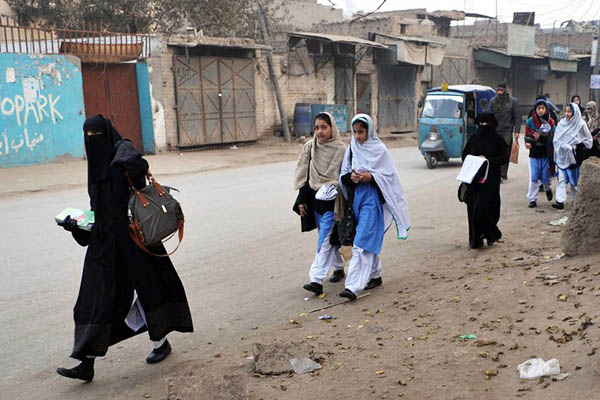 The Khyber-Pakhtunkhwa government is rewarding teachers and schools that promote literacy—and punishing those that don’t.

Nearly half of Pakistan’s population is illiterate. Despite an increased focus on education spending in recent years, the country continues to face an “education emergency.” The government of Khyber-Pakhtunkhwa province hopes to overcome this through independent monitoring units, which are tasked with providing real-time data to aid in formulating a uniform education system and with rewarding dedicated teachers for their commitment and hard work.

Parliament enacted the 18th Amendment to Pakistan’s Constitution in 2010, which devolves the education sector to the provinces. As part of its efforts to improve literacy and retention rates, the Khyber-Pakhtunkhwa government established the Independent Monitoring Unit in 2014. Comprising 500 men and women who oversee 25 districts, the IMU collects and collates data that then informs policymaking through direct communication with stakeholders.

IMU employees are equipped with a smartphone preloaded with an app that collects and transfers all relevant data to a central hub in Peshawar. This data is then shared with district and provincial officials, who measure the performance of various educational institutions and winnow out elements that are hindering further progress.

“I joined the IMU to ensure no one would be deprived of education,” says Shabnam, an employee of the task force. “I owe it to all education-deprived girls of Torghar,” she added, referring to the smallest district of Pakistan, which has a literacy rate of less than 7 percent. As part of her job, Shabnam monitors 62 schools in the region—sometimes traveling two to three days across treacherous terrain—and compiles information on their functioning and facilities.

“We often stay with the local community and I am very grateful for their hospitality,” says Shabnam “The women and girls of this district need our help. It is because of my presence and people’s faith in me that now even female health workers and district officials feel confident in going out into the field and performing their duties.”

According to official records, her efforts are paying off. All 62 of Torghar’s girls’ schools are functional for the first time in decades and teacher and student absenteeism has been reduced to its lowest levels. Shabnam says it was common for schools in the region to shutter without notice prior to the IMU initiative, but now administrators are more diligent.

Work done by the IMU has also led to the reopening of 281 schools that had been closed due to lack of funds. Approximately Rs. 5 million has been recovered from habitual absentee teachers, and overall teacher absenteeism has reduced by around 50 percent since March 2014. Similarly, student absenteeism has reduced from 35 to 22 percent in the same time period.

But while the IMU’s most visible accomplishments focus on punishing the schools and teachers that fail to deliver, it also rewards teachers and institutions that post positive gains. Using the collated data, the Khyber-Pakhtunkhwa government recognized, for the first time in the province’s history, 960 teachers and principals for their “excellent” work. In a ceremony held in September, Rs. 100,000 was awarded to each principal and Rs. 50,000 to each teacher.

Teachers and administrators who spoke to Newsweek said they were gratified that their efforts were finally being recognized. “I hope other governments follow suit and create similar initiatives,” said Arshad Khan, a senior teacher. A headmistress, Anwar Sultana, also praised the government, saying she had never received any acknowledgement before.

But while most educators praise the Khyber-Pakhtunkhwa government’s efforts, there are some that question its dedication to the education sector in light of controversial curriculum reforms.

A senior professor at Peshawar University, who requested anonymity, told Newsweek he was disappointed that the Pakistan Tehreek-e-Insaf-led provincial government had been unable to ensure a secular syllabus after bowing to pressure from coalition partner Jamaat-e-Islami. “It is not a valid excuse for the PTI to blame it entirely on the Jamaat-e-Islami,” he said, referring to duplication of content, an increased focus on Quranic verses and the removal of ethics courses for non-Muslim students. “They cannot justify imperiling the future of the nearly four million students who study in the 28,000 public schools of Khyber-Pakhtunkhwa just to please one political party.”

A former official of the Peshawar Textbook Board echoed similar concerns, saying the JI had removed many chapters related to western authors or scientists, claiming the accomplishments of non-Muslims were irrelevant. “It’s great that the Khyber-Pakhtunkhwa government’s IMU is making a difference, but every child has a right to know why authorities feel it is ok to ignore western scholars who have contributed to society.”

The PTI members of national assembly showed their concerns about the school curriculum while criticising implementation of the National Action Plan, but it’s their call to take action in KPK where their coalition partner Jamaat-e-Islami is spoiling it for them. It is a very wrong approach of the government to keep children in dark about western scholars by deleting contents from the curriculum.

Good. Positive news. Hope The KPK Govt Keeps This Up.

Imran believes in real change. He will turn KPK in to one of the World’s best cities in less than 10 years. We need to bring Imran as a Prime Minister of Pakistan.