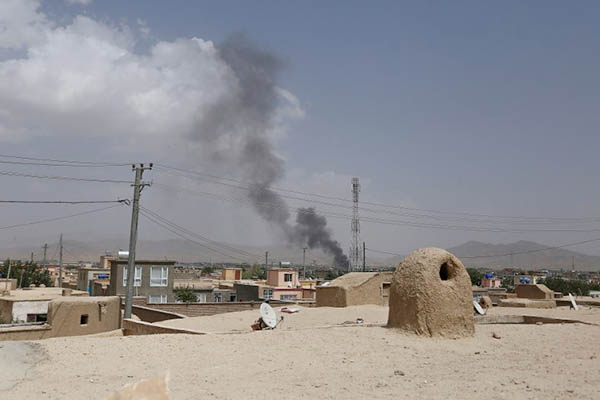 At least 100 security forces, 20-30 civilians killed in fight for Ghazni

At least 100 Afghan security forces have been killed as troops backed by U.S. airpower struggled to push the Taliban from embattled Ghazni city, officials said on Monday, while residents reported food and medicine shortages four days after fighting began.

The Afghan government said it had sent reinforcements to the strategic city, which lies barely two hours drive from Kabul on the main highway connecting the capital with the country’s south. U.S. forces in Afghanistan said they had been conducting airstrikes daily since the fighting began.

The assault, which the Taliban launched late Thursday, comes as the insurgents are under increasing pressure to join peace talks and highlights the difficulty of repelling their repeated attacks on urban centers crowded with civilians, with residents among the dead.

“About 100 security forces have lost their lives and between 20 and 30 civilians have been killed,” defense minister Tariq Shah Bahrami told a press conference in Kabul, offering the first high-level official casualty figure since the insurgents entered the city. He also said that 194 insurgents had been killed and 147 wounded.

The Taliban swiftly responded, saying the government’s claims were “baseless” and that talks were “under way for their surrender.”

Doctors were struggling to treat dozens of wounded at hospitals in the eastern provincial capital, where residents said insurgents roamed the streets. At a hospital in the city wounded people could be seen groaning in agony on stretchers, while uncovered wooden coffins filled with bodies were laid on the floor.

A doctor in the hospital’s intensive care unit said they had received over 80 dead as of Sunday and had treated more than 160 patients, many of whom were had been injured by gunshots or shrapnel. “There are no police or soldiers to guard the hospital. They bring their wounded and then leave,” the doctor, Mohammad Arif Omari, said. “The hospital is overwhelmed,” Andrea Catta Preta, a spokeswoman for the International Red Cross in Kabul, told AFP.

With residents reporting power remained out in the city, she said the Red Cross was able to reach the hospital on Monday during a brief lull in fighting, providing nearly 200 liters of fuel for its generator and medical supplies for over 100 people. “Everybody is requesting assistance, so we have been doing what we can whenever we have a window of security to do something,” she added.

An AFP reporter in the city said late Sunday that militants were going door to door and commandeering supplies including water, tea, and wheelbarrows to move injured fighters.

Ghazni residents who arrived in Kabul after fleeing the violence told AFP that the dead bodies of militants and soldiers continued to litter the streets, while government offices have been set ablaze by Taliban fighters and food prices are rising.

“Everyone wanted to find a way to flee the city. Most of the people are still hiding in their basements as fighting is going from street to street,” said Ghazni journalist Fayeza Fayez, who arrived in Kabul late Sunday after fleeing the city.

Communication networks in Ghazni remained mostly down, and officials have been reticent, making any information difficult to verify and fueling rumors of high tolls. Most officials contacted by AFP in Ghazni and Kabul had switched their phones off.

The United Nations called on all parties to respect the rights of civilians caught in the crossfire.

The onslaught was the latest attempt by the Taliban to overrun an urban center, and comes as pressure increases on the insurgents to begin peace talks with the government to end the nearly 17-year-old war. It was also the largest tactical operation launched by the Taliban since an unprecedented truce in June brought fighting between security forces and the Taliban to a temporary pause, providing war-weary Afghans some welcome relief.

Ghazni lies along the major Kabul-Kandahar highway, effectively serving as a gateway between Kabul and the militant strongholds in the south.

U.S. forces in Kabul denied reports that the highway had been blocked by the insurgents, saying Afghan forces remained in control of the area and were carrying out a clearance operation targeting militants.

Confusion over one deployment of commandos headed for Ghazni also raised concerns, with local media reporting up to 100 special forces troops were missing. An official at the Ministry of Defense denied the reports.