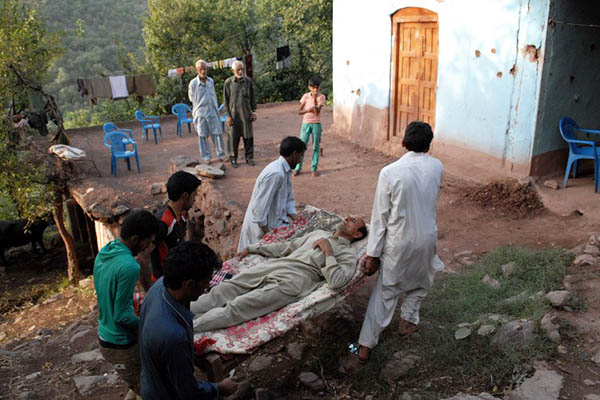 Three women were killed as Indian and Pakistani forces kept up heavy cross-border firing in the disputed Kashmir region, officials said on Wednesday, taking the civilian toll to 12, with dozens more injured.

The latest casualties came overnight after nine people died Monday in what was the troubled region’s highest civilian toll in a single day in over a decade.  Thousands of people on both sides of the border have fled their homes to escape what residents said was some of the worst shelling in years.

Kashmir is divided between India and Pakistan but both claim the scenic Himalayan region in full. Clashes occur regularly along their disputed border known as the Line of Control (LoC) as well as along the internationally recognized frontier dividing Indian-administered Kashmir from Pakistan’s Punjab province.

The latest eruption of shelling this week has fanned tensions between the nations, which have fought three wars, two over Kashmir.

Two women were killed overnight Tuesday in Chilyari village on the Indian side of the international border and 18 other civilians were injured, some of them critically, claimed director general of police K. Rajendra. They were among the few who had not fled the village, which lies just three kilometers from the border with Pakistan.

“I have seen wars and lived through many border skirmishes, but I never before saw such intense firing,” said 80-year-old Chilyari resident Kartar Chand.

On the Pakistani side, a 19-year-old woman died when mortar shells fired by Indian troops hit her house near the LoC, claimed local administration official Shaukat Ali.

The firing by Indian troops was continuing in Goi village, some 500 meters from the LoC, according to an AFP reporter at the scene.

Chaudhry Hakim Din, 70, said his house had been destroyed by shelling. “We can see the Indian soldiers aiming guns at us … they deliberately target us and our houses and livestock,” said Din. “Our joint family lives here and we’re about 50 people but now we can’t go out—even for getting food and drinking water,” he said.

Din’s wife, Mishra Bibi, 65, added: “Our children leave for school in dark and come back also in the dark to avoid bullets from Indian troops.”

Indian security sources said the shelling had occurred along the internationally recognized border as well as the LoC. India and Pakistan traded blame for the latest escalation in violence.

Pakistan’s military blamed the new fighting on unprovoked firing from India, which has an estimated 500,000 troops deployed in its part of Kashmir.

Fighting between Indian forces and rebels seeking independence or a merger of the territory with Pakistan has killed tens of thousands, mostly civilians, since 1989. Violence has fallen in the region since 2004 when the countries began a peace process a year after signing a ceasefire agreement that has largely held.

India called off peace talks last month after Pakistan consulted with Indian Kashmiri separatists, in a move some saw as a sign of a tougher stance under India’s new right-wing government. Home Minister Rajnath Singh said India would “not tolerate such acts of border violations by Pakistan.”

“Pakistan must realize that a decisive government has come to power, which will not take such instances lying down,” Singh said in an interview with the Hindustan Times daily published Tuesday.

Around 7,000 people are living in temporary camps on the Indian side after being displaced by the shelling, the Press Trust of India reported. Hundreds of families are still living in tents after devastating floods in the remote Himalayan region last month.