Catholic Icon Mother Teresa to be Proclaimed a Saint 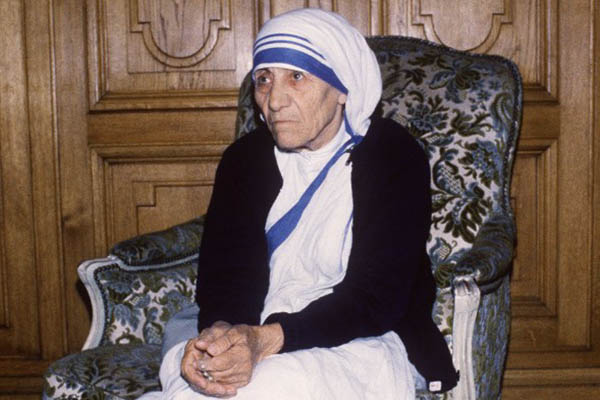 The revered but controversial nun will be canonized this Sunday.

Mother Teresa, the revered but controversial nun whose work with the dying and the destitute made her an icon of 20th Century Christianity, will be declared a saint on Sunday.

The elevation of the Nobel Peace Prize winner to Catholicism’s celestial pantheon comes on the eve of the 19th anniversary of her death in the Kolkata slums with which she is synonymous. Teresa worked with the poorest of the poor in the sprawling metropolis formerly known as Calcutta for nearly four decades, having initially come to eastern India as a missionary teacher with Ireland’s Loreto order.

Born to Kosovar Albanian parents in what is now Macedonia in 1910, Teresa died in 1997. By then she was a household name around the world and also a citizen of India, the adopted homeland that embraced the diminutive and doggedly determined sister to the extent that she was granted a state funeral.

Her canonization has been completed in unusually quick time on the back of the extraordinary popularity she enjoyed during her lifetime and with the help of influential supporters.

The late pope John Paul II, a personal friend, was the pontiff at the time of Teresa’s death. He fast-tracked her beatification [the step before sainthood]. The current pope, Francis, is also an admirer of a woman he sees as embodying his vision of a “poor church for the poor.”

The Missionaries of Charity, the order that Teresa created in 1950, now operates in 133 countries and comprises almost 5,000 male and female members.

During her life, Teresa was widely revered as a self-sacrificing force for good, despite ferocious criticism from prominent intellectuals including the British writer Christopher Hitchens and the Australian feminist academic Germaine Greer. Hitchens wrote a book about her entitled Hell’s Angel that branded her a hypocrite who fetishized the suffering of the poor while making sure she herself had access to the best available health care.

In death, Teresa’s legacy has become more widely questioned as researchers have revealed irregularities in the financing of her Order’s activities and questioned the running of her missions, many of which have been described as insalubrious at best with little attention paid to hygiene or alleviating the pain of patients. Her reputation has also suffered as the focus of Western aid work has moved away from immediate relief to development programs designed to deliver sustainable improvements in living standards: the model of teaching people to fish rather than feeding them fish.

Teresa was well aware of such criticism during the latter stages of her life, answering them by saying that her faith in Christ made her know that holding the hand of a dying person was a worthwhile activity. Nor did she deny that evangelism was her primary purpose: we are missionaries, not social workers, she said in various formulations over the years.

There was never the slightest hint of her compromising on the tenets of Catholicism in the name of improving the lot of impoverished communities, a stance most famously illustrated by her description of abortion as murder by mothers in her Nobel acceptance speech in 1979.

Around 100,000 pilgrims are expected in Rome for Sunday’s ceremony, around a third of the total that turned out for Teresa’s beatification, seen as the last major outing for John Paul II who died in 2005.

Under Catholic canon law, the proclamation of a saint usually requires the candidate to have inspired two miracles—one allows beatification and the second clears the way to sainthood. In Teresa’s case the first miracle, approved in 2002, involved the 1998 recovery of a Bengali woman, Monica Besra, from an ovarian tumor. The second, recognized in December, relates to a Brazilian man, Marcílio Haddad Andrino, who claims to have suddenly woken up without pain in 2008 after his wife prayed to Teresa for relief from the agony caused by brain tumors.

Andrino will attend Sunday’s ceremony while Besra, 50, told AFP she would mark the occasion at her home in the village of Nakor. “I have always considered her a saint, like God,” she said. “I prayed to her day and night and always believed that she would fix me. I’ll be praying and celebrating here at home on Sunday. Her canonization is a wish come true.