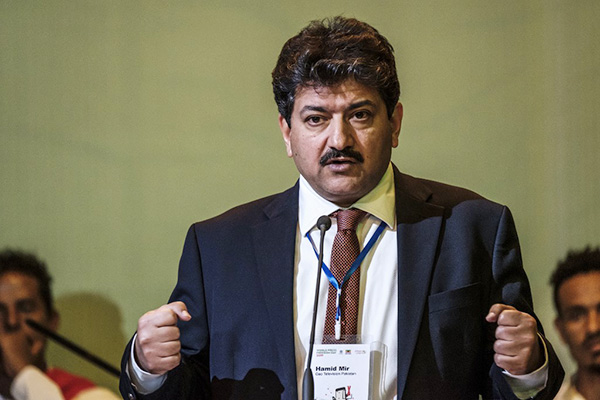 Pakistan’s largest private broadcaster abruptly took an interview with former president Asif Ali Zardari off air shortly after it began, deepening fears of increasing censorship in a country already deemed among the most dangerous in the world for media.

Geo News did not give a reason for why it cut the interview—mere minutes after it started—with Zardari, who is also the widower of assassinated former prime minister Benazir Bhutto. There have been accusations in recent years of the country’s military putting pressure on the media to stop coverage critical of its policies—allegations it repeatedly denies.

Zardari and his Pakistan Peoples Party (PPP) have a tense relationship with the military, and he is currently facing corruption charges as part of a wider crackdown.

Hamid Mir, the interviewer, complained on Twitter about increasing censorship in Pakistan after the show was taken off the air Tuesday night. “Those who stopped it [the interview] have no courage to accept publically that they stopped it,” he tweeted, without identifying any single culprit. He apologized to viewers, adding: “it’s easy to understand who stopped it? We are not living in a free country.”

Mir made international headlines in 2014 after surviving multiple gunshot wounds in an attack he blamed on Pakistan’s top spy organization. A subsequent inquiry report claimed his allegations were based on assumptions rather than reality.

Criticism of Pakistan’s security establishment has long been seen as a red line for the media, with journalists and bloggers complaining of intimidation tactics including kidnappings, beatings, and even killings if they cross that line. Last year, the Committee to Protect Journalists (CPJ) alleged in a report that the military has “quietly, but effectively, set restrictions on reporting.”

Geo News has faced pressure from authorities in the past. Last year, it was temporarily taken off the air in the run-up to the general election won by Imran Khan. Some of Pakistan’s biggest and most powerful media outlets have claimed they were pressured to tilt their coverage toward Khan during the campaign, an accusation denied by the military—and the PTI.

Zardari has accused Prime Minister Khan of being the military’s “blue-eyed boy.”

After his wife’s assassination, Zardari served as president from 2008 until 2013, and has long been the subject of corruption allegations. He is widely known in Pakistan as “Mr. Ten Percent.” He was arrested last month in connection with a high-profile money laundering case that saw millions allegedly siphoned out of the country, allegations he has denied.

Apparently the writer doesn’t know shit about Pakistan. He has conveniently forgotten to mention that the person who was being interviewed was supposed to be in judicial custody n was out to attend parliament session since his “production orders” were signed by the speaker of National Assembly but instead Mr Zardari chose to do this interview while out to malign the judiciary and create a favourable image about a case pending in court. Mr Hamid Mir is a known liar who has reported falsely many times in the past. If he considers himself so righteous, why doesn’t he name the person who stopped the interview. The writer really should get some schooling before penning a one-sided article..