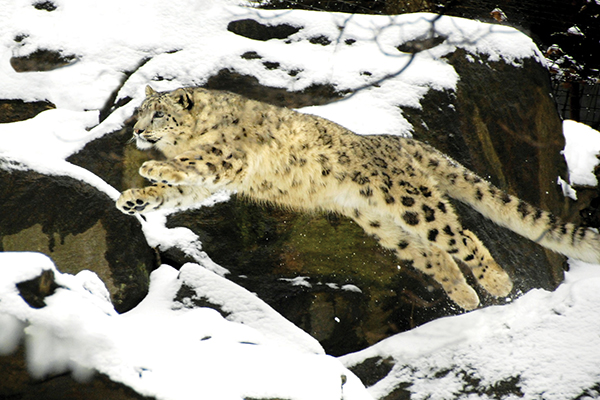 A new cub at the Bronx Zoo is the cat’s whiskers.

Even Pakistan’s wildlife thrives abroad. The newest star attraction at the Wildlife Conservation Society’s Bronx Zoo is a cub born to Pakistan’s Leo, a snow leopard rescued from the Nalter Valley in Gilgit-Baltistan eight years ago. The yet-unnamed cub was born April 9 and weighs 17 lbs. He is on display now in New York City alongside his mother, Maya.

The birth has excited Pakistani and American diplomats. “It’s heartening to learn that Leo had his own cub this summer,” says Asad Majeed Khan of the Pakistan Embassy in Washington. “Leo has served as a symbol of deep friendship and abiding good will between our countries.” Leo’s “remarkable journey is testament to the commitment of the Pakistani people in protecting their natural resources,” says Richard G. Olson, Washington’s envoy to Islamabad, and, of course, “to the depth of U.S.-Pakistani cooperation.”

Leo was shipped to America precisely because Pakistan has been unable to protect its endangered species. “One of the reasons IUCN helped push hard to get Leo to the Bronx Zoo was because there was simply no adequate facility within Pakistan,” says Aban Marker Kabraji of the International Union for Conservation of Nature. “A world-class wildlife rescue and rehabilitation facility is still urgently needed in the country.”

Snow leopards have been on the IUCN’s Red List of Endangered Species since 1975. Their population has declined some 20 percent over 16 years because of prey depletion, habitat fragmentation, retaliation killings, and trophy chasing. Still, there are an estimated 3,500 of them in parts of China, Mongolia, Russia, India, and Bhutan; and between 200 and 420 spread across 80,000-square-kilometers in Pakistan.

WCS, which runs the Bronx Zoo, is an invaluable partner for Pakistan. It has a century of experience in snow-leopard care, and ongoing projects in Pakistan, Afghanistan, Tajikistan, and China. Since 1997, it has created 60 committees and trained more than 100 Pakistani rangers to protect wildlife, especially snow leopards. Its program to insure farmers in Baltistan against the loss of livestock to preying carnivores has been so successful that it’s been exported to China, India, and Nepal. USAID has also stepped up. It recently announced $100,000 for a community-conservation program to protect snow leopards in Chitral. But, as their dwindling count screams, much more needs to be done to save the big cats. “More concerted action needs to be taken in the areas where they live,” says Scott Perkin from IUCN’s biodiversity-conservation program. “This means local level action that addresses the needs of both people and wildlife.”

The half-Pakistani cub in the Bronx “is very active and spends a great deal of time exploring his environment,” Dr. Patrick Thomas, the zoo’s general curator, tells Newsweek. “He spends most of his time with his mother, either playfully wrestling her or just resting beside her.”

Thomas was part of the team—which also included Pakistan’s Wildlife Department, World Wildlife Fund-Pakistan, and IUCN—that saved the cub’s father, Leo, from the Pakistan wild after his mother and siblings were killed by poachers. Leo has been on loan to the Bronx Zoo since August 2006, and resides in the award-winning Himalayan Highlands habitat there. In 2010, Leo got star treatment in the children’s book, Leo, the Snow Leopard, authored by Tribeca Film Festival cofounder Craig Hatkoff and his daughter Isabella. (Hatkoff is also famous for his book on Knut the polar bear.)

Leo was moved to New York in August 2006 under a “groundbreaking agreement” facilitated by the U.S. government between Pakistan and the WCS. He remains the property of Pakistan, but will stay in the U.S. until his birth country can establish a snow leopard rehabilitation facility up north. Plans to set up such a facility remain stillborn. It is just as well. Pakistan’s wild beasts seem to fare much better in American captivity. Meanwhile, Peter Zahler of the WCS says the Pakistani government has been asked to name Leo’s firstborn. Too bad the cub isn’t female. Islamabad could have named it Aafia.

Great Job by USAID, but such funding is not sufficient to ensure conservation of this majestic species on sustainable basis. There is a dire need of investing more in conservation and awareness building campaigns in remote areas like Chitral. In general bulk of funds are dedicated for research purposes, no doubt research is most important issues to invest in, but community based conservation interventions are even more important in areas where snow leopard depredation on livelihood means of communities is more frequent. Though often go unnoticed and unreported, either intentionally or unintentionally by concerned govet departments and NGOs, the retaliatory killing of snow leopard in Chitral is increasing day by day in district Chitral. The prevailing situation in district Chitral demands to conceptualize and implement a well designed “Compensation for Depredation Programme” to ensure sustainable conservation of this wild cat in Chitral.

Aafia? That’s not really funny, at all.

One thing may not be known to those quoted in this report : Pakistan is able to keep not one but two snow leopard cups one in Khyber Pukhtunkhwa and the other in Gilgit all by indigenous technology. Another thing is that the Forest and Wildlife Service in Pakistan has a long history of professionalism (older than that of the US Forest Service) Alas due to vicissitudes of time things have deteriorated but we still have a few great men up here

“Too bad the cub isn’t female. Islamabad could have named it Aafia”

Good to know that there are 2 cubs bred in captivity now in Pakistan. If these are healthy and science permits I propose that Pakistan gets one from the Bronx collection in place of Leo. This may be good to get cross fertilization from US based snow leopard blood.

Why not name him OBL or Raymond Davis

Euphemism aside we must realize the ground realities;the inputs required to have a comprehensive plan to save the snow leopards and their habitat in the wild need a lot of money. Unfortunately the only substantial source of money is with agencies like USAID etc. who have other things on their priority list like that remain urban issues and where the local governments are already funding a lot. Many NGOs have tuned their outlook to suit the donors. Wildlife and Forests receive no attention from both domestic and donors. There must be some windows to fund conservation and environmental education