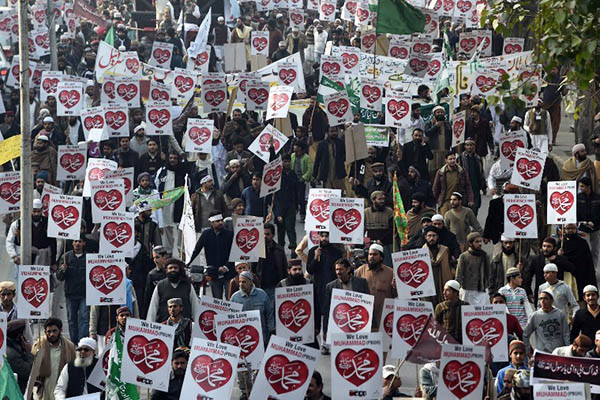 Police say the attack on the boys’ school does not appear to be anti-Christian.

Four students were slightly hurt in the incident in Bannu, which happened as students from local colleges and schools demonstrated against the cartoons printed in Charlie Hebdo. “A group of some 200 to 300 protesting students entered Panel High School after jumping its outer walls and forcibly opened the gates,” said school principal Fredrick Farhan Das. He said the students who wanted the school to be shut damaged the property and smashed windows. “This caused kind of a stampede, which slightly injured four students,” Das said.

He said the school remained closed on Tuesday in protest against the incident and will re-open on Wednesday.

District police officer Abdul Rashid Khan confirmed the incident but said it was not thought to be an anti-Christian attack.

Two Islamist gunmen stormed the Paris offices of Charlie Hebdo earlier this month, killing 12 people. The magazine then published a “survivors” issue with an image of Islam’s Prophet weeping on the cover, triggering a wave of angry condemnation and protest in Muslim-majority countries across the world including Pakistan.

Under Pakistan’s blasphemy laws, insulting Islam’s Prophet can carry the death penalty, and Prime Minister Nawaz Sharif and Parliament have strongly condemned the publication of the cartoons. At least three people were injured on Jan. 16 when protesters and police clashed at an anti-Charlie Hebdo demonstration outside the French consulate in Karachi.